Near Death Experience In The Stars 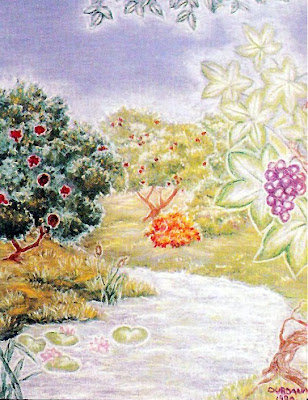 I'm back on the life after death theme again today with a Near Death Experience. This is the story of a small two-and-a-half year old girl called Durdana Khan. At the time she was living in the foothills of the Himalayas, where her father was an army doctor.

Dardana had been ill for several months and was gradually deteriorating. She was becoming paralysed but what was wrong with her wasn't fully known.

One day, while working, her father received an urgent message from his wife telling him that something had happened to his small daughter.

He hurried home. On arrival Dardana was in a cot outside with his wife. He realised straight away that 'she was gone'. On hearing this her mother lifted her daughter's limp body from the cot and carried her into the house and laid her on her husband's bed.

Her father, in his capacity as a doctor, carried out routine emergency procedures but felt that it was a lost cause. But he kept saying to her, "Come back my child, come back."

As an absolute last resort a heart stimulant was given to the her by administrating nikethamide drops. The couple watched their daughter, sadly and with heavy hearts, as the drops trickled down her cheeks.  But, after being 'dead' for about 15 minutes, something amazing happened. Dardana opened her eyes and told her parents that the medicine was bitter. Gradually the little girl recovered and the parents also recovered from the trauma.

Dardana's mother asked, "Where did my little daughter go the other day?"

Remarkably the little girl replied, "Far, far away, to the stars."

"Indeed," asked her mother, "and what did you see?"

"Gardens." was the answer.

"And what did you see in the gardens?"

"Apples and grapes and pomegranates."

"There were streams, a white stream, a brown stream, a blue stream and a green stream."

"And was there anyone else there?"

"Yes, my grandfather was there and his mother and another lady who looked like you.. Grandpa said he was glad to see me, and his mother took me in her lap and kissed me."

"Then I heard my Daddy calling, 'Come back my child, come back.' I told Grandpa that Daddy was calling me and I must go back.  He said we should have to ask God. So we went to God. He asked me, 'Do you want to go back?' I said, 'I must go back.' And down, down, down I came from the stars, on to Daddy's bed."

Durdana was asked what God was like and her reply was one word, "Blue."

Durdana went to Karachi with her mother for convalescence. At her Uncle's house she saw a photo and shouted out, "Mummy, Mummy. This is my grandpa's mother. I met her in the stars. She took me in her lap and kissed me." 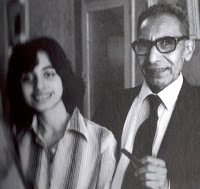 This all happened in 1968. Twelve years later in 1980 the family moved to London, England where her story was featured on BBC television. The producer of the programme suggested that Durdana should try and paint what she had seen while when she was 'in the stars.' One of the pictures is at the top of this post. (Photo right shows Durdana and her father in 1980).

After the story was shown on television a Mrs Rachel Goldsmith asked if she could see Durdana and the pictures again. This was agreed and when the lady saw the paintings, which had only been shown briefly on television, she said of one of them, "My God. I've been to this place."

Mrs Goldsmith had also had a near death experience and is positive that she had been to the place painted by Durdana. The two of them discussed the scene and also what was round the bend of the river and therefore not included in the picture.

Durdana has been quoted as saying that she was happy while in this after life and only returned out of a sense of duty. She felt as if she was 'everywhere at once' and could 'reach whatever she wanted.' Physical objects appeared ethereal and had no substance. There was no source of light so everything was 'visible through it's own luminescence.'

As to what this all means is up to the individual to decide.

Further Reading:
Pam Reynolds Near Death Experience
Black Elk On Peace And At The Door Of Death
Where Is Heaven?

Email ThisBlogThis!Share to TwitterShare to FacebookShare to Pinterest
Labels: Heaven, Life After Death, Near Death Experiences