The Book Of Fate And Degrees Of Separation

Sometimes life makes you think about what might have been, if only things had turned out differently. This in turn leads to subjects such as fate and destiny.

I got thinking along these lines because of an email I received regarding a post I published back in March 2010. This was titled Thought Of The Day: The Sadness And Sorrow Of War. It featured a letter (see below) sent to an old aunt, Ella English, informing her that her fiancé had been killed in the second world war. 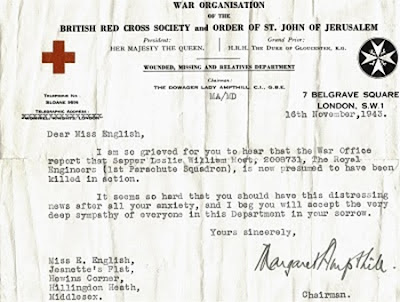 I received the email out of the blue and it was from a relative of Sapper Moat (Ella's fiancé) who was researching her family tree.

The lady hadn't realised that Leslie Moat was ever engaged, and didn't know of Ella English. Fortunately I had a photo of the couple to show her, which was handed down to me from my mother when she died.

All in all I thought the email to be quite a coincidence, synchronicity if you like, showing how we are all linked together. This got me pondering what might have been.

If Sapper Moat hadn't have been killed he would have married Ella English and no doubt they would have had children and a whole new family - which could go on for many generations - would have been created. As it was Ella never married.

Oh, and the lady who wrote me the email would have become one of my relatives! Who knows, we may have got to know each other quite well. But it wasn't to be, so we never met or knew of each other - except for the recent email.

Whether we like it or not we are all linked and related but, by 'fate', have never met. So what we do must affect everyone else, because we are all part of everything. Okay, it may be in a minimal way but it could also be in a huge way. Who's to tell.

Receiving the email I mentioned was strange because the one before that was also from someone I didn't know. He wanted to use an image from my blog and went on to say he lived in northern Germany. This just happens to be where my wife was born and lived until a teenager. Another 'coincidence'.

Again this stressed the connections between all of us and goes along with the proven idea that we are all linked by six degrees of separation.

I also mentioned fate and destiny at the beginning of the post and was reminded of a passage from a poem Essay on Man by Alexander Pope:


Heaven from all creatures hides the Book of Fate,
All but the page prescribed, their present state ...
O blindness to the future, kindly given,
That each may fill the circle marked by heaven:
Who sees with equal eye, as God of all,
A hero perish and a sparrow fall,
Atoms or systems into ruin hurled,
And now a bubble burst and now a world.

Wonder what the Book of Fate has in store?

Other Similar Posts:
Destiny Rolled Out Before Us Coincidence
Top 10 Coincidence And Synchronicity Stories
The Biggest Coincidence There Has Ever Been