We Stumble On A 3000 Year Old Settlement At S'Illot Mallorca

While in Mallorca over the past two weeks we stumbled over an ancient Talayot settlement (above) in the small coastal town of S'Illot. What fascinated me was that these remains were only  a short distance from what is now a popular tourist beach resort (below).

On an information board there was an artist's impression of how things may possibly have looked some 3000 years ago.

The settlement shows an indication that it was originally surrounded by a defensive wall of large slabs of limestone weighing more than a ton each (as below).

This site at S'Illot was believed to have been occupied for more than a thousand years. The oldest remains date from the Bronze Age (1100-850 BC). 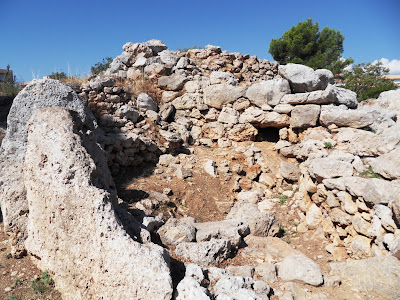 Life in the Tayalot village or settlement was organised around communal or social areas made up of large buildings and simpler houses in which the people lived.

Each house had areas for sleeping and for preparing food around a hearth. The daily diet would have been goat, pig and ox meat supplemented with cereals and tubers - not quite my thing being a vegetarian! 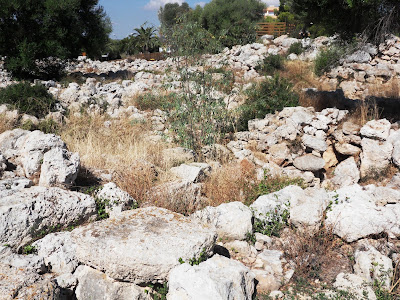 I think what surprised me was how the remains of this settlement are accessible to visitors to wander through with no apparent restrictions. Though in saying that, when we found them by chance there was no one else around. We had the place to ourselves while, a few minutes away, others were frolicking in the sea. But I guess a sandy beach and clear water is quite an attraction on a warm, sunny day. Must admit we did succumb to a bit of a swim ourselves!

We left the town of S'Illot and found a coastal path with some very nice scenery and big, interesting rocks. Sideways on this reminds me of some ancient face: 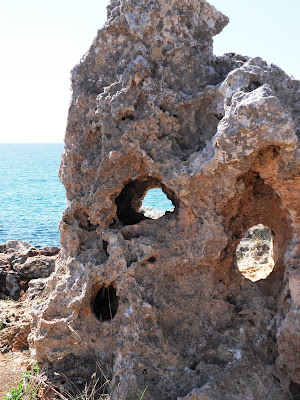 Other Mallorca Posts:
A Travel Blackout To Cure And Improve Our Tomorrows
The Power Of Synchronicity In Mallorca