A Travel Blackout To Cure And Improve Our Tomorrows 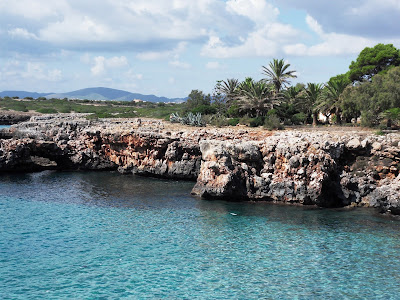 I have been away in Mallorca for the last sixteen days on holiday. During this period I had a complete news blackout - no computers, television, newspapers, phones and so on. At the time of writing this post (Monday) I have no idea if the USA has sent missiles hurtling in the direction of Syria; how many goals England beat Moldova by, in their World Cup qualifying match (I presume they won); if any so called celebrity has done something outrageous, purely to get themselves in the public eye. I don't know if ... well, so may things I would normally have heard about in the media but - guess what?

The strange thing is that the world has carried on without me knowing any of this. I don't actually need to fill my head with a lot of this garbage.

Here's another strange thing. I don't want to harp on about a health problem I had last year, but I will a little. Following surgery, nearly a year ago, I have had continued aches and pains on and off, though doctors and consultants say I'm okay. Within two days of being in Mallorca these aches and pains disappeared.

You can probably see where I'm going with this. I'm not saying that the aches were the fault of the news media but there is something to be said for that old adage ignorance is bliss. What we don't know about doesn't affect us.

Another strange thing. I took some books to read while away and one of these was The Zahir* by Paulo Coelho, and I'm not sure why I did. I have never thought much of Coelho's books or what all the fuss was about The Alchemist. I thought it very overrated.

Despite this I felt compelled to read The Zahir first and found that the main character in the book said very much what I had been thinking:


"I didn't turn on the TV to watch the late-night news, because the news was exactly the same news I used to listen to as a child: one country threatening another country, someone had betrayed someone else, the economy was going badly, some grand passion had come to an end, Israel and Palestine had failed to reach an agreement, another bomb had exploded, a hurricane had left thousands of people homeless."

And isn't that the truth. As I have written before, nothing is new. We are constantly manipulated to seeing all that is wrong with the world - the negative side. No wonder so many people get illnesses and depressions. What we take in becomes part of us. Or as Coelho writes:


"They (us?) accumulate experiences, memories, things, other people's ideas, and it is more than they can possibly cope with. And that is why they forget their dreams."

So what do we do? According to the tradition of the Steppes, known as the Tengri, to live fully it is necessary to be in constant movement - a nomad if you like - where everything, therefore, isn't the same.

It's doubtful if many of us can become nomads and constantly view new places but this is what Coelho's character in his book suggests as an alternative:


"Not physically, no, but they can on a spiritual plane. Going further and further, distancing yourself from your personal history, from what you were forced to become."

All in all my break from the news media emphasised to me, what I have often said (but sometimes forget), about how what we think, say, do  and hear creates our tomorrows - our circumstances, health and life in general.


*Zahir:
The idea of the Zahir comes from the Islamic tradition and is thought to have arisen at some point in the eighteenth century.

Zahir, in Arabic, means visible, present, incapable of going unnoticed. It is someone or something which, once we have come into contact with them or it, gradually occupies our every thought, until we can think of nothing else. This can be considered either a state of holiness or of madness.

Faubourg Saint-Peres
Encyclopaedia of the Fantastic.

Other Mallorca Posts:
We Stumble On A 3000 Year Old Settlement At S'Illot Mallorca
he 1696 Mallorcan Castle Also Used In The Spanish Civil War
The Power Of Synchronicity In Mallorca