Reincarnation: Her Small Son Had Been Killed In A Previous Life During World War 1 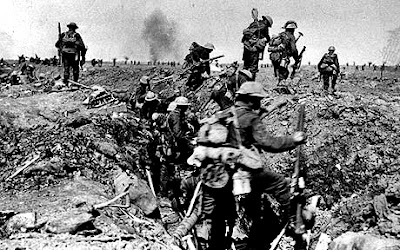 Patricia Austrian didn't believe in reincarnation but her young son, Edward, made her change her opinion.

When four years old Edward had a bizarre phobia. He disliked dark, grey, damp days. He was constantly ill with throat problems and called this his 'shot'. His mother didn't know why he did this.

Doctors discovered that he had a large cyst and swelling in his throat. An operation was necessary to correct this, but first doctors decided they would remove his tonsils. After this relatively minor surgery Edward told his parents his story.

He told them of the time he was a soldier in the Great War (World War I). He was 18 years old and was walking through muddy fields. It was cold, damp and grey and his rifle was heavy. He remembered fields and trees and suddenly heard a shot behind him. The bullet went through another soldier and then hit him in the back of his neck, blood rushed into his throat.

Remarkably, after telling his story and how he was killed, Edward's cyst disappeared. The doctor was very surprised and is quoted as saying that this kind of cyst 'never goes away' by itself.

It was as if the tension built up in his memory bank was released and he was returned to good health.

The BBC has featured Edward Austrian's case in a study on reincarnation. His story is included in the video below.


See also the 67 Not Out post:
10 Stories About Reincarnation