67 Not Out On BBC News Coincidence - Sort Of 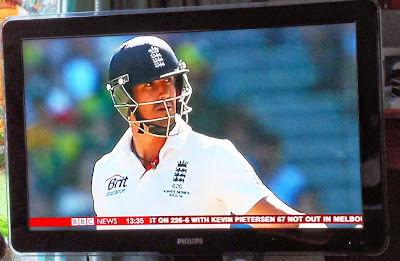 I guess it had to happen eventually. I turned on the television yesterday at lunchtime to catch the news. And the BBC kindly put up this blog's name on the screen i.e. 67 Not Out! I managed to snap the occasion, though it's not too clear. I must have got shaky with the excitement of the coincidence - or maybe it was just too much lunch.

As for the cricket in Melbourne, I'd rather not mention it for reasons that other English people will understand.

But here's a cricket coincidence about Melbourne and the very first Australia v England Test Match:

"What is now recognised as the first Test of all, the match between Australia and England in Melbourne in March 1877, ended in a win for the home side by 45 runs. One hundred years later, a special Centenary Test was staged in Melbourne to mark the occasion - and Australia won an exciting encounter by 45 runs." Source

Other Coincidence Stories:
He Saw His Wife Hit By A Boomerang 20 Years Before They Met
Suzie Gets Back Riding The Synchronicity Highway And Meets A Long Lost Friend
Even A Sink Plughole Can Yield A Coincidence Story

Email ThisBlogThis!Share to TwitterShare to FacebookShare to Pinterest
Labels: Coincidence and Synchronicity, Coincidence story, Coincidences in the Media, Sport