Here's a happy story that makes you wonder if some things in life are meant to be. Are some of the events in our lives pre-planned? 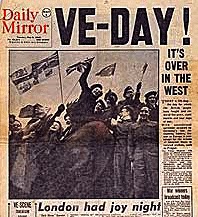 "On May 8, 1945, VE Day, as a Royal Navy leading signalman I was on shore leave with my shipmate mingling with the cheering thousands in Trafalgar Square after Winston Churchill broadcast that war in Europe was over.

Meanwhile, a young lady named Daphne Atkins was partying in a mile-long conga, which later turned up Shaftesbury Avenue and through the pub where my mate and I were having a well needed drink.

On their way through the pub, Miss Atkins stumbled and fell into my lap. She was embarrassed and tried to get up but I held on to her and said, 'There's no hurry.' I asked her to join us in a victory drink.

That was 69 years ago and we're still together. We have celebrated our 65th wedding anniversary, and we now have two lovely daughters, nine grandchildren and three great-grandchildren.

Other Random World War 2 Posts:
Ephemeral That Makes Up A Life And Is Easy Forgotten
67 Years After The D-Day Landings They Meet By Coincidence
Coincidence During the Battle for Crete World War 2