An Alien Encounter Where A Strange Object Was Implanted Inside Him 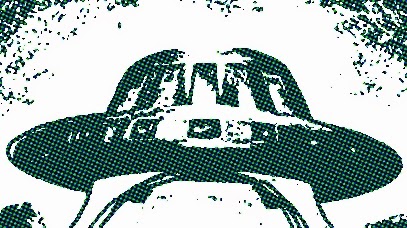 This is a alien sighting and abduction story seen in the archives of The Daily Gazette. It goes back a while but it seems that the person involved, Richard L.Price, would still like to find out who the creatures were that abducted him when a child and implanted a strange object inside him.

Price said, "I've felt over the years, that they've been with me - that they're with me all the time."

This is his story:

When he was eight years old he and a friend were walking near the railroad tracks in Troy. On hearing a noise, which sounded similar to a train approaching, they headed into a wooded area. The friend decided to turn back so Price was then alone.

He continued walking near a cemetery and a covered bridge. This is where the encounter happened.

At first he was scared. He said, "When I got a look at them, I turned and ran. Then all of a sudden, as if they did something to me, I stopped and wasn't afraid any more."

The aliens communicated with him, "You are coming with us."

They took him to their spacecraft. It was an oval shape with six sides on top and on the bottom. There were pedestals coming out of the bottom for landing, similar to those seen in old science fiction stories.

He described the aliens as being between 4 and 5 feet tall with grey-pink complexions and they wore suits of red and blue together with helmets.

Price was taken into the craft and shown what he describes as a movie, only it felt to him as if he was part of the film. Amongst other things the movie showed a battle in space, where another craft was blown up by using beams of light which the spaceships were aiming at each other.

He was then taken into another room and had to remove all of his clothes for an examination. A scanning like device was used over his body. At one point the scanner stopped and burned his leg but he didn't feel any pain. Another instrument was passed over his leg and it was healed straight away.

Next came his implant. A hand held instrument was used to implant a tiny object under the skin of his penis. He was told not to tamper with it. He was then released to go home.

He didn't tell anyone about what had happened.

As he got older and attended High School, however, he mentioned what had happened to a girlfriend. His encounter and the story soon spread around his classmates.

The news also got out to his parents and other adults and Price was sent for psychological tests and was confined to a psychiatric hospital for three months. He was only released when he told the doctors he had made up the story. This was the only way they would free him.

In the early 1980s Price saw a physician, Neal Rzepkowski, who confirmed there was an object under the skin of Price's penis, that did not belong there. Rzepkowski told him not to disturb it as it wasn't infected or causing him discomfort.

The physician told The Daily Gazette, "... He appears normal. Who knows? It might be true."

He claims he looked at the item through a magnifying glass and saw something crawl away from it, and is convinced it was an alien bug.

As for the object itself an identified physicist at Massachusetts Institute of Technology was given half but has yet to identify it. All the physicist would tell the Gazette was that the object was made up of carbon, oxygen and hydrogen and was therefore organic or biological.

And that is the Richard L.Price story.

Other Random Posts:
Could This Be Proof Of Reincarnation?
The Ghost Sightings In London's Top Hotel
The Black Stick Men Who Stalk Our World At Night