White Doves As Messengers From Beyond The Grave 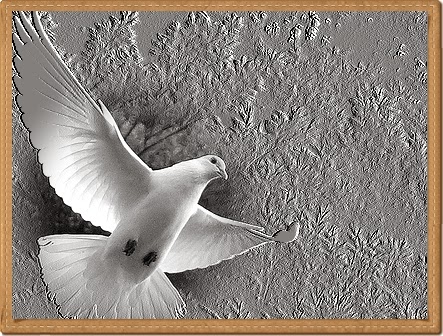 Two more stories today about white doves and how they may be messengers or signs from the deceased. I will let readers reach their own conclusions regarding the stories.


I was interested to read your posts about white doves as they concur with thoughts I have had recently.

In May of this year I heard from my sister-in-law that my brother, Frank, had been taken into hospital following a nasty car accident. It wasn't possible for me to travel to see him until the coming weekend. That same evening, as I was looking out of my lounge window, a beautiful white dove landed on the lawn in my back garden. This was something I had never seen previously and the dove looked like he was looking at me, as I was looking at him.

I went outside and the dove flew up in to a tree and sat there looking down. It impressed me so much I went back indoors to fetch my camera. As I did so the telephone rang. It was my sister-in-law telling me that Frank had just died.

After this I saw, what I took to be, the same dove several times, but no more sightings recently.

I feel sure that the dove was in some way connected to my brother's death.


Peekaboo (my cat) got his terminal illness diagnosis on July 24 and was released from the vets on Friday July 25. This morning, Saturday, was the first time outside for Peekaboo and I since his diagnosis and we went out at dawn (1st light, call to prayer) which we have been doing for the month of Ramadam in solidarity with Muslims murdered around the World.

We went out at dawn (he had trouble going down the stairs) and walked to the front of the house where we heard a bird calling.

We looked over our heads and three white doves were flying above us heading north and one was calling to us and the other two silent.

Evidently the Holy Spirit wants Peekaboo for something.

I've had my doubts about Allah, but a few Summers back when the war on Libya began, four (4) giant tan coloured swans flew over our heads at dawn heading North.

I interpreted this as the the four horsemen of the apocalypse of Revelations (though I'm non-believer in Torah). It appears with the wars that have occurred since that dawn that perhaps the reckoning of 'Revelations' is near.

White doves and white feathers may also be signs from our animal friends:


Just lost our beloved dog on Saturday and since then have seen three white doves circling above our car and today a white feather stuck to the side of my shoe! I'm sure its to tell me Maxx is fine. x

A Few Other Similar Posts:
20 Examples Of How The Dead Contact Us With Messages Or Signs
The White Dove As A Messenger Of The Dead
The Meaning Of White Feathers As Messages From The Dead
Readers Stories About White Doves And White Feathers

Email ThisBlogThis!Share to TwitterShare to FacebookShare to Pinterest
Labels: Messages from the dead, Spirits, White Dove