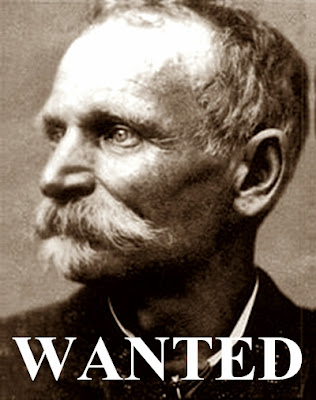 I've been looking at old books again. This time the John Wayne Adventure Annual from the mid 1950s. In this I read about, amongst other things, the story of Black Bart. It's a true story - and must be so, as John Wayne would never have lied, would he?

Of all the fabulous characters of the roaring West none is more striking - and humorous too - than Black Bart, the natty desperado who left little poems in the stage-coach boxes he looted.
Here I lay me down to sleep
To wait the coming morrow,
Perhaps success, perhaps defeat,
And everlasting sorrow.
Let come what will, I'll try it on,
My condition can't be worse;
And if there's money in that box
'Tis munny in my purse.

~ Black Bart
His proper name was Charles E Boles and he was born in England but moved to the USA. He was a dapper little man with twinkling blue eyes and a grey moustache.

And the peculiar thing is that he became a hold-up man as the result of a practical joke.

He held up a Wells Fargo stage as a joke and didn't even have a gun with him. All he had was a stout stick off a manzanita bush and held it as a six shooter!

What happened next surprised Bart. There was no armed rider escorting the stage and the driver looked startled when Bart swung out on the trail with his imitation gun. Bart thought he'd just see how far he could take the joke.

"Throw out your treasure box!" he commanded.

In a panic the stage driver flung the box to the ground and made off with the coach.

The treasure-box burst open and there before Bart's astonished eyes was a couple of thousand dollars in gold bars, coins and gold dust.

"Well now," thought Bart, "If I can get as much in two minutes by a joke as I cam earn in two years maybe I'd better stick to practical joking."

Which, of course, was wrong of him ... and justice was to trap him in the end, as it always does!

But that's how Black Bart became a desperado, and went into the hold-up business.

To cut a longer story short after one hold-up he only got away by the skin of his teeth - and left behind his hat. Law officers eventually traced him to San Francisco where a Mr. C.E, Bolton was caught and unmasked as being Black Bart the stage-coach robber,

His time in jail over, he started robbing again and Wells Fargo bullion suffered ... but the Wells Fargo sleuths recognised his hold-up methods of old.

They soon cornered Bart. he told them he would like to retire from the bandit business ... if only he had a regular income from somewhere.

Well, it seems hard to believe, but American historian G. Ezra Dane has it on record that the company gave Bart a pension of two hundred dollars a month - providing he wouldn't rob any more!

And, as the John Wayne Annual concludes; "H'm ... they sure must have had a soft spot in their hearts for Dapper Black Bart..."


To Clarify:
Charles Earl Bowles (sometimes Bolles or Boles) was known as Black Bart. He was an English-born outlaw noted for the the poetic messages he left behind after robberies. Known as Charley or Charlie to his friends, he also went under the names of Charles Bolton, C.E. Bolton and Black Bart the Poet. He was barn in 1829 and died some time after 1889.

It's interesting in life though, as to what makes us who or what we are today - unexpected things can happen which send us off in a completely different direction.

Other Recent Blog Posts:
The Weird Case Of The Volcano Which Popped Up From A Corn Field
White Feather Girl Gets A Spanking
The Coincidence Of Finding Money Against The Odds