The Reason Why December 26th Is Called Boxing Day 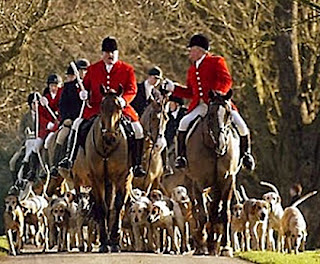 How Boxing Day came about is not absolutely clear. The most popular thought is that this was the day when servants and tradesmen would collect their Christmas Boxes - i.e money tips for good service - from the gentry or their employers.  These money gifts or 'boxes' were mentioned in Samuel Pepys' diary entry for December 19th 1663, so the tradition goes way back.

Another explanation for Boxing Day dates back to when sailing ships set off to discover far away lands. They would take with them a sealed box full of money as a good luck talisman, to help keep them safe on their voyages. When they returned safely a church service of thanks would be held and the box was presented to the vicar or priest. This would be kept until Christmas, when the contents would be shared with the poor.

I believe I was three years old and at Christmas we were staying in a country location with friends of my parents. The Fox Hunt started from outside the cottage where we were staying. I remember distinctly the horses and dogs, the colour and all of the excitement. Back then I didn't, of course, realise that the idea was to kill the foxes, with the dogs tearing them to pieces - something truly horrific in my eyes today.

Oh yes, and now Boxing Day is when the sales start in many of the shops and stores. The January Sales now come early. Commercialism has taken over. Once it was simply family, sports and thinking about those less fortunate than ourselves, but now it's greedily shopping for supposed bargains. What skewed priorities we have.

Other Random Recent Posts:
The Little Boy That Santa Claus Forgot
The True Story Of The Fanny Scratching Ghost Of Cock Lane
Look Out! Look Out! Karma Is Coming to To Get You!