Her Uncle Visited Her From Beyond The Grave 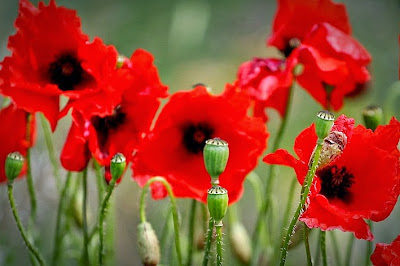 The question with today's post is: Did Susan's uncle contact her from beyond the grave? Or maybe it was all a simple 'coincidence' - if there is such a thing, of course.


My uncle was a lovely, caring man and was a Manchester United [English soccer club] supporter.

When he died it was the day before Remembrance Day, and I visited the chapel of rest to say a last goodbye. Uncle was dressed in a black suit and tie with a white shirt, and it struck me how drab it all looked.

So I took a poppy I was wearing and pinned it to Uncle's lapel. Then I kissed him on the cheek and left.

Fast forward two years and I was sitting watching Manchester United playing in a Champions League match on TV. There was only me in the room but my son was upstairs watching the game.

The door to the hall was open and out of the corner of my eye I thought I saw my son standing there. I turned to speak but there was no one there - just a glow of light on the floor.

This happened four times over the next 20 minutes or so, until eventually I got up and shouted up to my son, asking him if he'd been down. He said he hadn't. I returned to the lounge and continued to watch the game, still aware of the glow on the door,

There was a huge vase of silk poppies - my favourite flower - in the room. Suddenly one of the poppy heads fell off the flowers and onto the floor. I was quite shocked as I was the only person in the room and had not moved.

I phoned my sister's friend who is a psychic medium, and he asked me whose anniversary was around that time, I said my Uncle's.

Then he asked what I had given him in the chapel of rest. I was stunned, as it had been a poppy!

I ended the conversation and said: "Come in, Uncle, and watch the game." A few minutes later, when I turned round, the glow had gone from the door,

Random Other Posts:
23 Funny Children's Letters To God
The Devil's Sea Or Dragon's Triangle
The Unusual Contact With Her Dead Mother
>br />