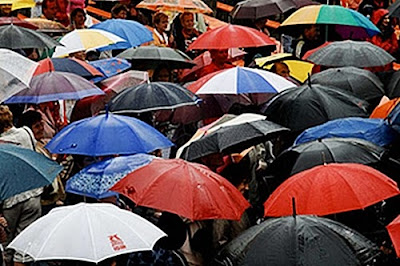 An amusing story today from Gabrielle.


"I wonder what you think of this, Mike, is it a coincidence?

I was in a big London store and inadvertently picked up someone else's umbrella from the counter. An extremely cross lady pointed out my error and red-faced I apologised.

The incident reminded me that I needed to buy a present for an old aunt and thought an umbrella would be ideal. I headed to the right department and, as it had started raining outside, I actually bought two umbrellas, one for myself.

Carrying my two umbrellas I got on a bus to take me home and sat in the only spare seat. The woman next to me was the one whose umbrella I had accidentally picked up in the store.

She looked at me grim faced, stood up to get off the bus saying, "I congratulate you on your successful morning," while pointing at my two umbrellas.

I was the rightful owner of the umbrellas but for some reason I felt speechless and embarrassed. I wonder what the meaning of this coincidence was!?