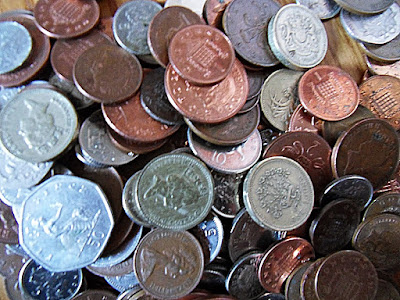 I've mentioned previously on my blog how my wife often finds money. Above are just some of the coins she has found! They aren't usually large amounts. However, she was a bit luckier when she found a £10 note (about $14).

It happened in the usual way, we were walking along together and she suddenly stooped down to scoop up the money. I never notice the coins or money myself.

I laughed when she showed me the banknote and said something like, "That's more like it, instead of all of those coins you normally pick up."

We carried on with our walk and returned by a different route. We were nearing home when, on the pavement in front of us, there were three young boys on bikes, probably about 9 or 10 years old. One was telling the others about how his mum would probably 'kill him' when he got home as he had lost some money which he was supposed to use for some items from a local shop.

On hearing this my wife asked him what he'd lost. He told us it was a £10 note, so we enquired as to where he had been riding his bike. Sure enough he had been past the spot where my wife had found the money.

She returned the banknote to him and his face looked so relieved. He then sped off to the shop to buy whatever it was his mother needed.

It was fortunate that we returned home by a different route - a coincidence if you like - otherwise we would never have been able to have returned the money to its rightful owner.

Feels good when there is a happy ending.

There is one more small part to the story though, on the Saturday following this my wife won £10 on the UK Lottery. Not exactly the millions she/we had hoped for, but in some ways it was exactly the right amount.

Further Reading:
The Art Of Finding Coins Or Anything Else