White Feathers As Messages From The Deceased 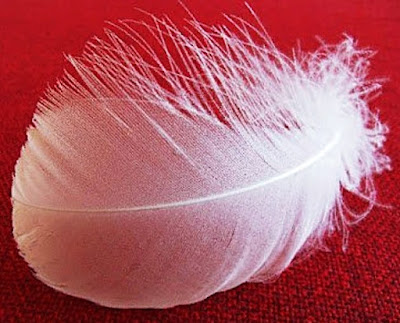 One of the the most popular themes I have covered on this blog is that of White Feathers - where they are seen following the loss of a loved one. Okay, I know this isn't everyone's cup of tea, and that many mock such things - that's fine!

I first raised the subject in 2010 because I experienced this myself. I saw white feathers, and in unusual circumstances, following the loss of three very close people within a short period of time.

I wrote back then: "The feathers felt like they were messages saying that things were alright. Often, after we saw one, something nice would happen. Of course, when we are emotional, there can be a tendency to hang on to whatever we find comforting. Some would say that the white feathers were like a crutch.

It's very easy to dismiss white feathers as something by chance or even superstition - feathers perhaps simply out of pillows, or even birds!"

Anyway, whatever your view. Here's a few more stories, some are anonymous - as the people concerned do not wish their names mentioned.


"My brother died last month following a long illness. We were very close and it was a heartbreaking time.

He died in hospital. Towards the end I visited him whenever I could. On his final day I stayed until midnight but the nurses persuaded me to go home and to get some rest. I did what they said.

At six o'clock in the morning the phone rang. I jumped out of bed, knowing who it was. It was the hospital telling me my brother had died. There was a white feather on the table next to the phone.

The feathers kept coming until after my brother's funeral. I really do feel they were messages from him."


"I lost my dad on July 24, 2015. July 26th, while dealing with a contractor at his house, I found a white feather on the door handle of my car, finer than goose down, I didn't think anything of it, and blew it off my car with a mouthful of air.

Yesterday at the bank, I talked to an elderly gentleman who told me of finding a white feather the day his daughter passed away from cancer.

Then, while talking with a friend of mine who had lost his dad, he told me to look out for weird things to happen, and mentioned his own white feather story.

A friend and a stranger brought it up without any prompting. I am ex-catholic, and proudly agnostic but this has changed me, be it religious, or just a spiritual thing. I had never heard of this before searching the internet for any info or other's past experiences - goosebumps for sure..."

And it appears to sometimes even happen when people lose pets!


"My lovely dog Bugsy was put down 7 years ago and we randomly get white feathers. Today my beautiful dog Fergie was also put down and there was a large feather under the kitchen table just before the vet arrived. It made me smile that Bugsy was telling me she was going to look after her."

If interested, you'll find lots more white feather stories on 67 Not Out.