Mystery Of The Joseph, Mary And Jesus Caskets Discovery 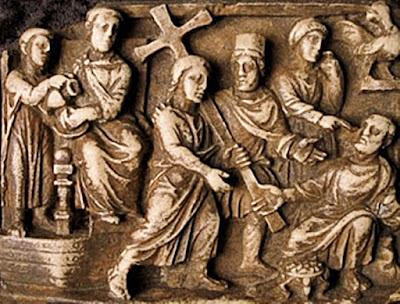 In 1980 researchers in Jerusalem got quite excited when they found three burial caskets, which they dated from the 1st century. Okay no great discovery, but there was another important bit to the find. The caskets each bore a name: Joseph, Mary and Jesus.

The oblong limestone caskets contained no bones, and were excavated from a building site near Jerusalem.

Israel's Antiquities Authority and other archaeologists quickly poured cold water on the find. They dismissed it as a coincidence, saying the names Joseph, Mary and Yehoshua - or Jesus - were common in the 1st century.

The Rev. Murphy O'Connor, a biblical scholar explained: "They're all very common names, perhaps the most common. It would be a statistical abnormality if you didn't find them in conjunction at same point."

He went on to say that scholars believe Joseph was probably buried in Galilee, in what is now northern Israel, and that Mary's body is believed to have been assumed by God into Heaven while the Bible says that Jesus ascended to Heaven.

So what could have been one heck of a find turned out to be a coincidence - with no real meaning ... probably!

I thought that was the end of the story (and my post) but then came across something the Daily Mail wrote in 2012 - to quote their words:


The so called Jesus Family Tomb was only examined; briefly before protests by Orthodox Jews, concerned about the disturbance of a grave site, ended the excavation. It was then sealed up, and a tower block built over it.

However James Tabor, a scriptural scholar at the University of North Carolina at Charlotte and documentary film maker Simcha Jacobovici were determined to continue the research. The pair obtained permission from the Israeli government in 2010 to use the robotic arm to drill holes allowing them to explore the surrounding area. This led to the discovery of a separate chamber which they named the 'Patio Tomb', as it sits almost directly below the patio of the building.

The inscriptions* mentioned above and 'seen' by the robotic arm reads; Divine Jehovah, raise up, raise up, Human bone was also found.

The mystery will continue because ... because that's what happens.