The Ghost Has Followed Her For 12 Years 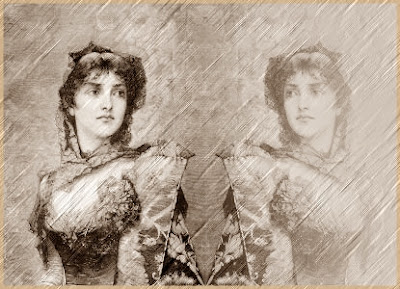 Further to my post yesterday June Raymond told me of her experience of seeing a ghost. She has only seen the one, but has seen it on and off for 12 years. June writes:


A ghost has been plaguing me on and off over the last twelve years. I even saw it when on my honeymoon, which slightly spoilt the mood!

The ghost does speak to me but only says, in a whispering voice, "Elizabeth, Elizabeth," while staring at me with glaring eyes. She is dressed in Victorian clothes with a full skirt,

Recently, while staying in a hotel, I saw the ghost again. It was about 15 feet from me, it gave me the willies. I'm not into spiritual things. I'm a normal married woman with a family but for some reason I do see this ghost. It's not my imagination.

The first time I encountered the ghost was when I went to stay with friends at a vicarage for a holiday. My friend told me to pick a bedroom from the ones they had free, The room I chose was quite cold, even though it was a summer day. Suddenly I heard a voice whispering, "Elizabeth, Elizabeth, Elizabeth." I panicked and ran from the room. None of the others could hear or see the ghost.

Since then the ghost has been with me on and off. It disappears for a few months, but then returns and I see it for a while. Nobody else sees or hears anything.

It doesn't frighten me any more. I ignore it and after a few days it goes away. I'm not aware of anyone called Elizabeth in my family tree.

Other Random Recent Posts:
The Ghost Or Spirit On My Stairs
Free Beethoven Music By Coincidence
The Natural Selection Coincidence Of Darwin And Wallace