Herons As Messengers From The Deceased 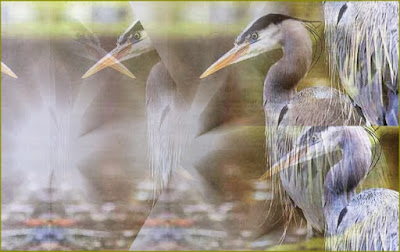 I have written previously that, though coincidence and synchronicity are the most popular themes on this blog, the next most popular are white feathers and white doves - being seen following a loved ones death. Some say that these are 'messages' from those who have died. Today a new one for the collection: herons.

In my first marriage, we had a garden with four acres, and herons used to come to our wildlife pond regularly - we really loved seeing them.

Sadly, my husband and I divorced, but we remained close friends even though we both remarried In 2010, he died quickly of cancer. The next day, as I drove through an estate close by a heron appeared and landed on a roof.

I slowed down and watched it, and it turned and appeared to look at me. It stayed on the roof standing for about five minutes, watching me.

I relayed this to our son and he said a heron had landed in his garden at the same time.

I rang our daughter and she gasped. A heron had landed in her garden also.

We all live a long way away from each other, yet, we all saw a heron at the same time, the day after his death.

Other Similar Posts:
The White Dove As A Messenger Of The Dead
The Unusual Contact With Her Dead Mother
10 White Feather Story Posts As Examples Of Messages From The Dead