The Grass Isn't Always Greener On The Other Side 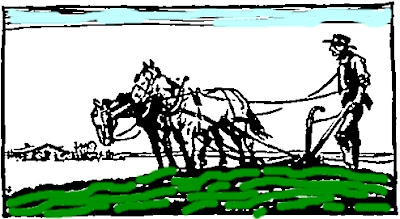 The grass is always greener on the other side - well so the saying goes. I was reminded of this when I came across a cutting from the Montreal Gazette, dated July 1948. It's a poem by someone called E. Anne Pomeroy - I don't know who she is - there's nothing I could find on Google, but here's her poem.

A farmer was plowing a meadow
In typical indolent style;
Lamenting his choice of occupation
Over each weary mile.
Looking up he spotted an aeroplane
Silver etched against the blue:
Said he, "Though born to tradition,
And a farmer to be, 'tis true,
How I wish I were that lucky fellow
Up there a-riding the blue."

The pilot looked down on the meadow,
With its various shades of green,
And spotted the indolent farmer
Driving the plow and team:
Said he, "What a lucky fellow,
Not a care in the world I see;
No rushing across the Atlantic,
And back to a hanger like me:
I'll bet for many a dollar
He wouldn't change places with me." 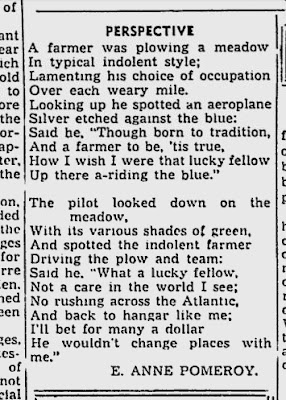 Other Recent Posts:
The Hoover Dam Coincidences
Miles Of Smiles And Good Things For 2016
Are These Comforting Messages From Dead Loved Ones?