Did Her Husband Send Her Crosses Of Light From Heaven? 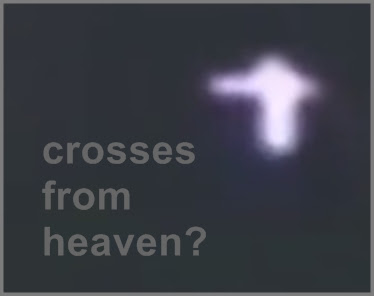 See what you think of this, something I saw in the Toledo Blade archives.


Death visited Jerry Andrews one sunny Saturday afternoon on an Arkansas State Highway. Killed in a one car accident, Andrew's untimely passing left his wife, Darlene, praying for a sign to assure her Jerry was safe in heaven.

A miracle in the image of several bright and multi-coloured lights shaped like crosses visited the Andrews family that same afternoon.

Since that fateful Saturday crosses have appeared in both a large picture window and a small window in the front door of Andrews' Wynne, Arkansas home. "As soon as I saw it, all my pain lifted," said Mrs Andrews.

Thousands of people from Wynne and surrounding areas have visited the Andrews home on Crabb Lane to view the apparitions. Cars still line the suburban street as the curious patiently wait their turn to sse a miracle appearing in their neighbour's living room.

For a God fearing community in the buckle of the Bible Belt, miracles are worth a wait. After seeing the crosses, people leave quietly and keep opinions of the images' authenticity to themselves. No one, however, has been able to expose the incident as a hoax.

Whether the crosses are a sign from above that Jerry Andrews is safe in heaven, or merely a previously unnoticed phenomenom remains a puzzle. That Darlene Andrews noticed the crosses when she did may only be a coincidence, but, would it really take great powers of observation to see crosses shining in your front window when you turned the lights off? Source: Toledo Blade Dec 26, 1987.

Other Random Posts:
Foreign Accent Syndrome: Her Migraine Gave Her A Chinese Accent
The Meaning Of White Feathers As Messages From The Dead
"If I Had Known" - How Many Times Have We Said This To Someone?

Email ThisBlogThis!Share to TwitterShare to FacebookShare to Pinterest
Labels: Heaven, Life After Death, Meaning of Life