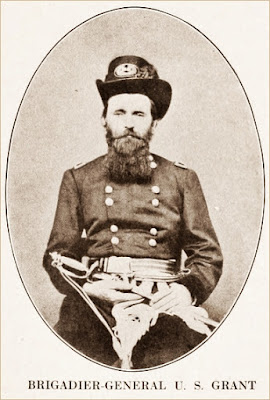 A light and fluffy story today, which I saw in a 1938 copy of a St Petersburg Times newspaper:

Lieutenant Wickfield, Union Army Officer, one day in the early part of the Civil War, stopped with a group of friends at a Missouri farmhouse for refreshments.

To impress the housewife, he represented his party as General U.S Grant and Staff. The men virtually stripped the farmhouse of victuals. Only a delicious pumpkin pie remained; the men were too full to eat it.

By coincidence, Grant himself the same day stopped at the same farmhouse - and found the cupboard bare, except for the pie. The housewife told the story of Wickfield's visit, so Grant set out after him.

With the Army at attention Grant read the following order:

"Lieutenant Wickfield, having on this day eaten everything in Mrs. Selvidge's house, except one pumpkin pie, is hereby ordered to return with an escort of 100 cavalry and eat that pie also."

The order was carried out.

AND SOMETHING COMPLETELY DIFFERENT -

I also saw this in the same newspaper:

"It is a scientific fact that gravitational pull on the earth varies at different latitudes. Accordingly, the pendulum of a cuckoo clock set to run on time at one latitude would swing faster or slower in another, depending on the gravitational variation."

If the gravitation effects clocks, wonder what difference it makes to us humans at different latitudes?

Other Random Posts:
A Minute Either Way And This Coincidence Would Never Have Happened
The Fisherman's Coincidence Of All Coincidences
Freemasons: The Solemn Obligation Of A Master Mason