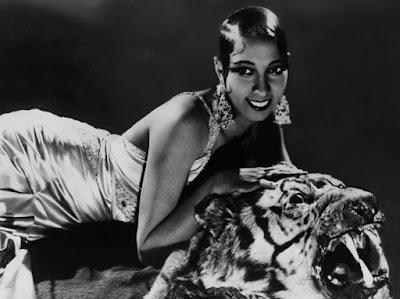 I must admit that I didn't know much about Josephine Baker (1906-1975) but I had read that Ernest Hemingway said she was, "The most sensational woman anybody ever saw." I then, by chance, came across a review from 1981 of a biography of Ms Baker by Lynn Haney - and this in turn led to a coincidence story. 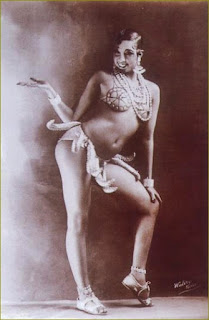 First though, Josephine Baker was an American born French dancer, jazz and pop music singer and actress. She became known as the Black Pearl, Bronze Venus and Jazz Cleopatra. There is much more to her though, which I won't go into here, other than to say she was supposedly the richest black woman in the world and the biggest American star to hit Paris, France.

When Lynn Haney was researching her subject she rented a motorbike and went villa-hopping in order to find people who had lived near Miss Baker when she had Les Milandes, a 15th century chateau in France's Dordogne Valley.

However, she found out more, much nearer home. One of her strangest meetings happened at Nathan's Famous, Brooklyn, New York City. Miss Haney was there having a bite to eat when she noticed an older black man reading some old Broadway handbills. She explained:


"It turned out he had been on the old black vaudeville circuit at one time. I asked him if he had ever run into Josephine Baker. He looked at me and smiled and said, 'Why, I was her manager.'

I don't believe in the occult but that was the most remarkable coincidence. And, of course he gave me lots of stories about her."

That's it! But isn't life strange, how things turn out, I had no idea what to write about today when by 'chance' I came across the story of Josephine Baker and this led me to the coincidence that Lynn Haney was talking about. Funny old world.

The book is still in print on Amazon: Naked at the Feast by Lynn Haney

Other Random Posts:
This Blog's 10 Most Viewed Posts
A Minute Either Way And This Coincidence Would Never Have Happened
Ladette To Lady Grandfather Coincidences