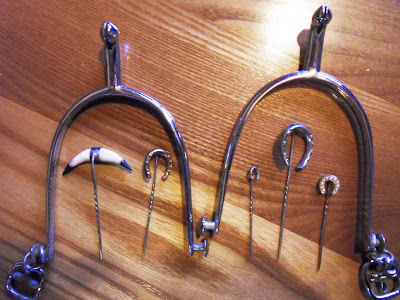 I have written previously in my post What A Coincidence That We Are Actually Here Now that my daughter-in-law has been tracing my grandson's family tree and therefore mine as well.

The British census for 1891 shows that when he was a young man Frederick William English (my maternal grandfather) worked as a groom at somewhere called Egglestone Hall. He also lived there as well. I knew he had a love of horses because his spurs and gold tie pins, with horseshoe designs, have been passed on to me (as per the photo at the top of this post).

But there is a further coincidence:

A neighbour gave my wife a pile of women's magazines. Karin didn't particularly want them but felt she had to accept them. On receipt the magazines were placed on one of the kitchen cupboards. Later that day I was making a pot of tea and, while waiting for the kettle to boil, I flicked through the top magazine.

One of the pages caught my eye. It was about a reality television programme called Ladette To Lady. It wasn't this that interested me - as it's not something I would normally watch - but it was the fact that the show was held at Eggleston Hall - yes, where my grandfather worked as a groom in the1890s.

Prior to seeing this I knew nothing about Egglestone Hall or even where it was.  So it looks as if the magazines from a neighbour were actually meant for me, to learn more about my grandfather. He died way before I was born and was a lot older than his wife, my grandmother Lucy, who lived until she was 103.

The photo below shows Frederick William English at Egglestone Hall. He's the man posing on his side at the front of the picture. I presume he is wearing his riding boots and gear. 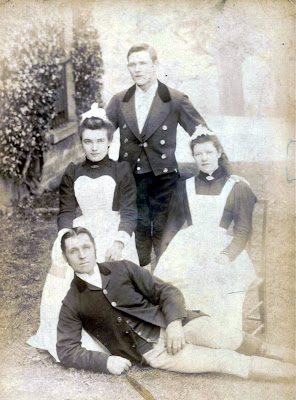