Fate Or Coincidence Brings Two Friends Together Over And Over 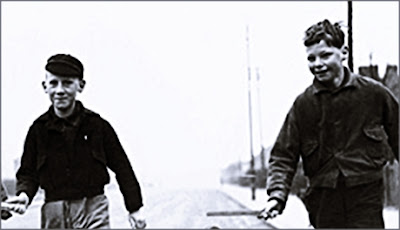 It's strange how some people seem to be part of our lives - whether we want them to be or not. Somehow 'fate' brings us into contact with someone over and over again - almost like it's meant to be - as this experience from John Hancox illustrates:


It all started in 1947. Up to the age of 11, the days began with me escaping early in the morning with my best mate who lived opposite.

We spent hours in the park, playing on the railway line or in the local wood. ending long after dark, but only if our parents could catch us.

Our friendship ended when the local council rehoused us a mile or so away. Five years later we moved to the next county and lost all contact.

At 20, I found myself crossing the parade ground of the police training centre wearing the uniform of the local county force, when I spotted my old friend coming towards me wearing the police uniform of my old county. We wasted no time in catching up, amazed at the coincidence of us both joining the police at the same time, something we had never discussed.

Off we went to start our new careers hoping to stay in touch, but we never managed it. Ten years passed, wives and children followed, until I decided to move back to the town where I grew up.

On day one, at my new police station, I saw my old mate at his desk. I said, "Well, it's great we are working together." He replied, "Not for long; my transfer to another station has come through." That was it - off he went 12 miles away. It had become a standing joke about calling round to each other's houses for a cup of tea, which we never managed to do.

A further three years passed until one day, with my back to the office door, I heard it open and that familiar voice shouted: "Don't bother coming round for a cup of tea, I have bought a house and am moving."

Taken aback, I then said: "You needn't come round my house either, as I am moving to my new house. Where are you moving to?"

That was 36 years ago and, yes, we still live in the same street - and we still have not had that cup of tea.

Other Random Posts:
Impossible Pie: A Way Of Life And Death
A Coincidence Sign That Perhaps Britain Will Exit The European Union!
The Bizarre UFO Mystery And a Man Found Dead