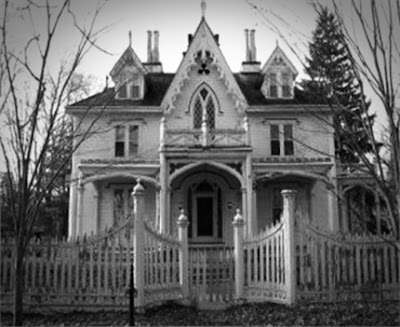 In south-west Nebraska a family believe their house to be haunted. Donna and her husband bought their house in 1988 but it wasn't until 11 years later that they began to first notice strange, sometimes disturbing happenings.

For example, Donna's young son, Toby, refused to sleep in his own room. She said, "He just refused to go in there and kept saying 'There's someone in there.'"

Toby told his mother that on several occasions he would hear a gun cocking beside his head, followed by the sound of a horn across the room.

There were other creepy incidents, a CD player would switch itself off, voices were heard from the basement.

Donna began to investigate the history of her home. What she learned astonished her.

Around 1935, after a flood, her home was moved to town from the country. Apparently, several people died in the house: a pioneer boy in 1886, an older woman, and a man who spent his time in a mental hospital.


The man was 42 when he died ... but there were some remarkable coincidences. He bought the house in 1888, exactly 100 years before Donna and her family moved in. The man had a daughter who was born in 1881 - Donna's daughter was born in 1981. The man's daughter graduated in 1900 - Donna's graduated in 2000, from the same high school. Their daughters also shared the same first name of Sally.

Strange things continued to happen. A friend stayed overnight, but was reluctant to stay in the house because she could see someone standing by the bed.

When the friend awoke the next morning, the necklace she wore to bed was gone and she had red marks on her neck.

Sally woke one morning with a large scratch across her forehead.

Things, however, gradually calmed and Donna said, "Lately, if we tell them to stop whatever it is they're doing, they'll behave."

Photo for illustration purposes only.

Other Random Ghost Posts:
The Ghost Sightings In London's Top Hotel
The Ghost Has Followed Her For 12 Years
Kate Says She Has Sex Regularly With A Ghost