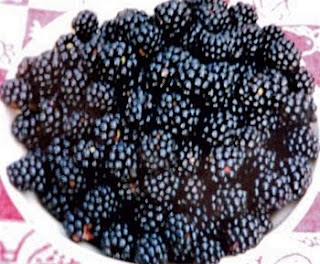 I mentioned a couple of precognitive dreams in a previous post Coincidence or Synchronicity - Example 4. Here is another instance of a dream I had which came true.

I had this dream in March about my stepdaughter, Jan, standing with her suitcases and being surrounded by blackberries. An peculiar dream so I made a note about it in a note book I kept for such things.

I thought nothing more about the dream. Jan had started working as a trainee hairdresser but after a few months the chemicals, used in the profession, effected her hands. So much so that the doctor advised her to give up her job.

She had a couple of other jobs but, where we live in Cornwall, work isn't exactly in abundance. Jan got it into her head that she wanted to look after children and secured a position with a wealthy family in London. In late August we said goodbye to her and saw her off on the train with her luggage.

It was a sad occasion for my wife and I and in the afternoon we went for a long country walk. You've probably guessed the rest. One field we past had blackberries galore in the hedgerow. As we had an empty picnic box with us we picked as many of them as we could. My wife likes to make jams and pies.

I was putting the full box into my rucksack when, out of the blue, I remembered my dream from earlier in the year: Jan with her suitcases surrounded by blackberries.

I've found that dreams can prove to be a wealth of information, some even see into the future. I must admit, though, that most are just gobbledygook. I've found it to be quite interesting to record dreams and see what turns up.

Sometimes dreams may just surprise you.
Posted by Mike Perry at 15:16

Email ThisBlogThis!Share to TwitterShare to FacebookShare to Pinterest
Labels: Coincidence and Synchronicity, Coincidences In Dreams