From a very early age I've always been interested in Buddha. No idea why, as this was far removed from my upbringing. When I moved into my first home one of the things I bought was a small Buddha as an ornament. I didn't know anything about Buddhism at the time. 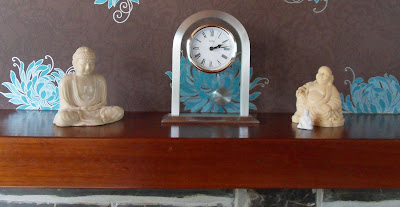 Later in life, when I was married, I saw another Buddha in a shop while visiting Spain. I just had to buy it. "Why?" asked my wife but I couldn't really give an answer. It was simply something I felt I had to do.

As the years ticked by I gradually got to know a little about Buddhism, not by seeking it out but because it simply presented itself to me. I also felt I had an affinity with Nepal and the Himalayas.

I'm not now a Buddhist - but it still fascinates me and is, somehow, within me.

Moving forward many years my mother had a severe stroke and had to move to a Nursing Home. It was a sad and difficult time. Just before she died we managed to get her to our house. It was very emotional as she said she had thought she would never see our house again.

As she sat in our living room she looked at my Buddhas on the mantelpiece (as per the photo above), where they had sat for many years including all the while my mother was fit and well.

"It's strange," she said, "My father always had a Buddha on the fireplace mantelpiece as well."

I didn't know this as I had never known my maternal grandfather. He was a lot older than my grandmother and died years before I was born.

My mother went on to say her father was a Buddhist.

I was amazed at this, as it was something I never knew and something my mother had never mentioned previously. My grandmother was very much a Bible person.

It's odd but years before, when I had seen photos of my grandfather as a young man, I felt I knew him. His face was familiar. As with Buddha and the Himalayas I felt a definite affinity with him. One of my prized possessions is a collection of several of his old fashioned gold tie pins.

A friend suggested to me that these connections are all down to reincarnation - but I guess that's another whole discussion, perhaps for a later date.


The young man looks and smiles.

His look, like his smile, is older than the boats, the nets, the old men, the women, the children, the cats, the seagulls.

In his look and in his smile there is the silence of peace, joy, harmony, acceptance, understanding and universal love.
- Giulio Cesare Giacobbe*

Further reading:
How to Become a Buddha in 5 Weeks

by *Giulio Cesare Giacobbe (book)
Coincidence or Synchronicity - 9 - A link with my dad (blog post)
Posted by Mike Perry at 14:47