This post follows on from Famous Coincidences - Abraham Lincoln and also ties in with posts about precognitive dreams. 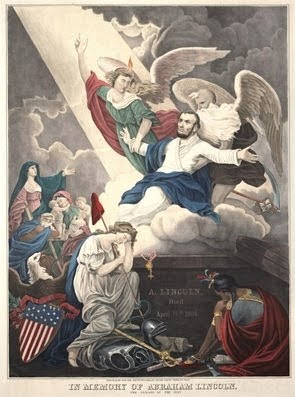 "Assured as he was about omens, which to his mind were conclusive - that he would rise to power and greatness, he was firmly convinced by the same tokens that he would suddenly be cut off at the height of his career and the fullness of his fame."

Lamon goes on to write about a dream that Abraham Lincoln had less than a week before he was assassinated by John Wilkes. He had a prophetic vision and in this dream the White House state rooms were all quiet and empty and he could hear the sounds of people weeping.

"Determined to find the cause of the state of things so mysterious and so shocking, I kept on until I arrived at the East Room, which I entered."

"There was a sickening surprise. Before me was a catafalque on which rested a corpse wrapped in funeral vestments, Around it were stationed soldiers who were acting as guards; and there was a throng of people, some gazing mournfully at the corpse whose face was covered; others were weeping pitifully.

'Who is dead in the White House?' I demanded of the soldiers.

'The President,' was the answer, 'He was killed by an assassin.'

There came a loud burst of grief from the crowd, which woke me from my dream. I slept no more that night.

Abraham Lincoln appears to have known in advance of his impending death.