A Precognitive Dream Made £56 Million For Charity 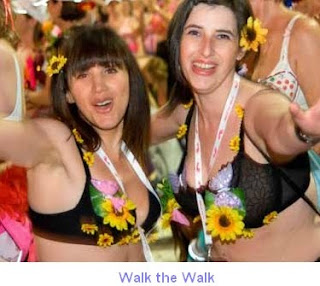 Nina Barough woke up one morning following a vivid dream. In this dream she had seen 'lots of women walking fast in a marathon, all wearing bras on top of their T-shirts, to raise finds for breast cancer research.'

This was back in 1996 when Nina, a British fashion stylist, was 42. The strange thing about the dream was that she had never entered a marathon or done any sort of fund raising plus she didn't know anyone with breast cancer.

The dream however was to lead to over £56 million (about $90 million) being raised for breast cancer and was also precognitive.

Following her dream Nina took to following it through and, together with 13 other women, entered the New York marathon purely for fun. They called their effort 'Walk the Walk' and in doing so they managed to raise £25,000 (about $40,000) for Breakthrough Cancer.

Walk the Walk may well have been a one off but in 1997 Nina herself was diagnosed with aggressive breast cancer.

Her friends and colleagues wanted to do something to help so another marathon was entered and another £25,000 was raised for charity.

Walk the Walk snowballed from there on, they became a proper charity and managed to get Prince Charles as a patron. Information on future walks can be seen on their website.

80% of all of the money they have raised has gone to Penny Brohn Cancer Care. This was personal to Nina as their integrated health programme was a big part in helping her to manage and conquer her own cancer.

During her own treatment she used power walking, diet, vitamins, positive thinking and visualisation. Nina said, "I became fitter, had more energy and felt more vibrant and balanced than ever before." To tie in with this Nina has written her own book called Walking for Fitness.

In this case Nina Barough's dream of women wearing bras raising money for charity came to reality - along with her own battle against breast cancer.

Following a dream can lead to some remarkable happenings.