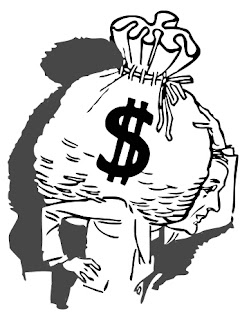 Over the years I've dabbled in many things from yoga to Rosicrucians, magic to the occult, psychology to philosophy and so on. I've always felt there was something else besides what scientists tell us.

I've often said that it's no use just reading something it has to be put into practice. This way it's possible to discover for ourselves as to whether what we read has some relevance or is just a load of old codswallop.

Following this principle, when we first met, I made my wife and myself a talisman each for attracting money. I followed the instructions as per David Conway's Magic

and handed one to my wife who immediately put this in her purse - she must therefore have thought positive about the talisman and the fact that it might work.

That week she attracted lots of money. This included a massive bonus from her work, which was entirely unexpected, and the conditions of her getting this were virtually 'impossible.' I reckon it might have been this that made her think I was a decent bet!

Since then we have both carried these money talismans in our wallets. They are looking a bit creased now but I wouldn't part with mine.

Many think that things like a talisman or lucky charm are absolutely rubbish. Fair enough, each to their own, but now scientists have said that there might actually be something in this 'lucky' business.

The University of Cologne has done a test with some of their students. They put them on a golfing putting green to find out who got the best results. Prior to this the researchers told half of the students individually that they would be playing with a lucky ball. The other half were just handed a golf ball without comment.

The students with a 'lucky' ball sank 6.4 putts out of 10. Remarkably this was an average of nearly two more than the other players in the experiment.

This may not be conclusive evidence but the co-author of the research, Lysann Damisch did admit, "Our results suggest that the activation of a superstition can indeed yield performance improving effects."

A professor of psychology at Connecticut College added that, "Simply being told this is a lucky ball is sufficient to affect performance."

This may be slightly different from my wife's money talisman. The golfers were in control to a degree. Whereas my wife simply had to believe that something would happen and the universe would do the rest. And that's the key word for me - believe.

Belief makes things happen and brings about those situations, coincidences if you like, which can result in amazing things happening.

Email ThisBlogThis!Share to TwitterShare to FacebookShare to Pinterest
Labels: Talisman