Captain David Perry And His Near Death Experience

I came across this Near Death Experience (NDE) when I was doing some research on my surname Perry. The story is about the recollections of an old officer, a Captain David Perry, who lived way back (1741 to 1826). He was involved, as a soldier, in both the French and Revolutionary wars of that period. He kept the experience of his NDE to himself for thirty years.

The following is Captain Perry's story in his own words, in the style of that time - he seems to have liked very long sentences! 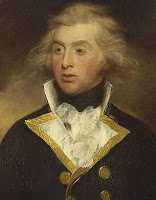 "While I was on board the vessel, it appears to me that I died - that I went through the excruciating pains of the separating of soul and body, as completely as ever I shall again, (and such a separation must soon take place) and that I was immediately conveyed to the gate of Heaven, and was going to pass in; but was told by one, that I could not enter then, but in process of time, if I would behave as he directed, on the set time I should have admittance.

It appeared to me that my feet stood on a firm foundation, and that I stood there for the space of about a half hour. In this time there appeared to be a continual flowing up of people, as we suppose they die; and none stopped, but all passed off, one way or the other.

Just at my left hand, there appeared to be the opening of a great gulph, and the greater part of the grown people seemed to pass off there. Once in a while one passed through the gate into the Holy City.

One person appeared, with whom I had been intimately acquainted, and it appeared to me that I knew him as well as ever I did: it was Doct. Matthews - [and whether I saw him or not, he died, as I afterwards learned, while I was sick on board the ship].

The one that talked with me, told me about the Revolutionary War, and showed me the British vessels in the harbor of Boston, as plainly as I saw them when they came. And during the first year of that war, I was down there in Gen. Putnam's regiment, and I went on Roxbury hill to see the shipping in the harbour, and they looked exactly as they had been shown to me many years before.

This transition (as I firmly believe) from life to death, and from death to life, which took place nearly sixty years ago, is as fresh in my mind now as it was then; and not many days have passed from that time to this, which have not brought the interesting scenes I then witnessed, clearly to view in my mind. But I never dared to say any thing about it, for a great many years afterwards, for fear of being ridiculed. But about the [last of February or first of January, 1763], peace was declared between England, France and Spain, and the people rejoiced exceedingly on account of it.

I told them we should have another war soon. They asked me why I thought so. I told them the British had settled peace with their foreign enemies, but they could not long live in peace, and they would come against us next. But I never told my own wife, nor any other person, of what happened to me on board the vessel, as above related, for nearly thirty years afterwards."