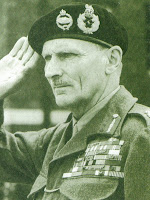 Doubles always interest me and they often go to show why we can't always believe what we see.

Take the famous deception caused in the Second World War by Monty's Double. Monty being General Montgomery (photo top right) the British soldier who was the commander-in-chief of all ground forces for the Normandy landings in 1944.

Security chiefs hatched a plan to delude the German forces that Montgomery was going to lead an invasion from southern France, rather than from Normandy. They decided to do this by using a double. Lieutenant Clifton James (photo right), by some strange coincidence, just happened to be the spitting image of Monty. James was seconded into action and his first job was to study the general's voice, gestures and mannerisms including the way he saluted and pinched his cheek while thinking.

By another coincidence James was previously an actor, so he had an advantage in trying to become Montgomery's lookalike. The only thing that bothered him was trying to fully capture the general's personality. He later wrote in his book I was Monty's Double, "He was so unique and overpowering that I despaired ever being him. It was one thing to ape the outside of a man, but quite another to acquire something of his fire and forcefulness."

Lieutenant Clifton James needn't have worried as he perfected everything and flew to Gibraltar as General Montgomery. Here he was greeted by the British Governor and by 'coincidence' also to several of Hitler's known secret agents.

He did a repeat performance in Algiers where he met - and was cheered by - British troops. News of Monty's whereabouts and plans travelled fast and were passed back to the German High Command via their 'secret' agents. The Germans had been taken in by a believable double.

The rest, as they say, is history.

Further Reading:
The Advantage Of Being Mistaken For Someone Else
Abraham Lincoln Describes His Own Doppelganger
A Double Or Doppelganger Coincidence