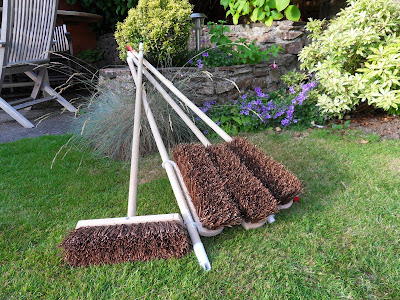 My wife said that she thought we needed a new broom for sweeping our outside paths. Me, being me said, "What's wrong with the two that we have?" They seemed okay to me, I'd only used them a couple of days previously.

Anyway, to keep it short, I was wrong! We needed a new broom. "I'll conjure one up." I laughed.

Two days later we set off for a walk from home. We have several routes that give us a three to four mile journey. We decided on which one we would do and set off, with not a mention or a thought of a broom.

We walked about a quarter of a mile and passed a house, where the owner was clearing out unwanted bits and pieces. Most of this he had thrown in a rubbish skip but there against the wall, with a sign which read: 'Please take away for free', were five brand new brooms!

We stopped and the man saw us looking. "Is it okay if we take one," I asked.

"I'd rather you took all of them," he answered and told us how he was clearing out his garage and sheds of everything he no longer needed. 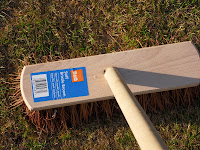 So, suddenly we were the 'proud' owners of five brand new brooms (labels still on them - they had to be assembled) - just as my wife wanted. I know there are only four in the photo but we have already given one away to our son.

When things like this happen it always amuses me. My wife wanted a broom and got five! As it says in St.Luke: "... and it shall be given to you; good measure, pressed down, and shaken together, and running over ..."

I'm not into any organised religion but there are 'truths' within the Bible alongside many that aren't, of course.

I think I've probably written something similar previously, but it seems that when we want something in a light hearted way, not really bothering if it comes about or not - it often appears.

This seems to be one of the secrets of visualisation: Picture what it is we want, release the matrix and then forget about it. A little while later, perhaps depending on how clear the picture created, the object arrives.

As St.Paul is quoted as saying, "Be not deceived; God is not mocked; for whatever a man soweth that shall he reap." But personally I reckon the universe has a sense of humour, we just have to be careful what we ask for.