A Dream Or An Alien Encounter?

I honestly don't know what to make of the following alien or UFO encounter story sent to me by email. I'll let you decide for yourself. 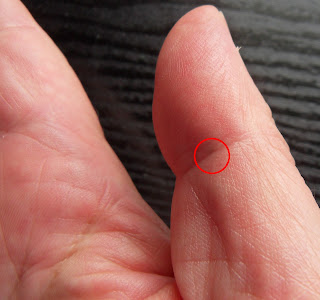 "I read your recent post about an alien and UFO encounter and wondered if you would be interested in my story, but please do not publish my name or email address.

I live in the Wiltshire (England) area, which seems to be a place for UFO sightings. I remember the first encounter I had when I was a teenager. A small creature with big eyes was in my bedroom. I remember being touched by it and then falling asleep. I woke up hours later with an aching thumb.

A few days after this dream I noticed a black mark under the skin on my thumb. This isn't very clear now, some thirty years later, but it can still be seen. It's in the crease of the thumb on my right hand and is black in colour.

Since that experience I have had another four similar dreams or encounters, the last being on July 10th this year. On this occasion there appeared to be several small creatures in my bedroom and I felt that I was unable to move. My wife was in the bed next to me but she didn't wake up even though I called out her name.

It then felt as if I was floating and the next thing I realised was that I was lying on a cold bench or table with my hand in some sort of vice like contraption. It didn't hurt but tingled.

The next thing I remember was my wife nudging me saying she wanted a cup of tea. I struggled out of bed and felt very drowsy and my right hand was very shaky.

In the local paper there was a report of UFO sightings in the area that week but the verdict seemed to be that they were only Chinese lanterns.

All of this does seem far fetched. My wife laughs it off as too much cheese or beer before going to bed. Maybe it is my imagination but the experiences feel very different from normal dreams."

Further Reading:
An Alien Visitation And UFO Sighting
Over 6000 Pages Of UFO Reports