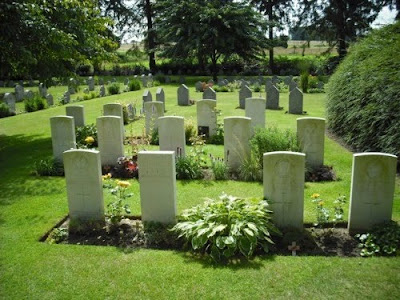 In the beautiful Saint Symphorien Cemetery near Mons in Belgium lie two men linked by a sad coincidence.

The military cemetery is dedicated to the fallen of the First World War which was said, at the time, to have been the war to end all wars. At rest are 284 German and 229 British soldiers - though this includes Irish and Canadian soldiers.

Two memorial stones face each other, perhaps just a few yards apart, separated by a strip of grass. At rest are Private John Parr, from Finchley, London and Private George Edwin Ellison from Leeds. Both were of the Royal Irish Lancers.

The two soldiers are the first and last British soldiers to be killed in WW1. Pte. Parr died August 21, 1914 and Pte. Ellison was killed on the morning of November 11, 1918. Both lost their lives within two miles of the cemetery.

It might be thought that the two soldiers were placed opposite each other because of their significance or symbolism, but this turns out not to be the case. Where they lie happened purely by 'coincidence'.

The Independent newspaper made enquiries about the positions of the memorial stones with the Commonwealth War Graves Commission.

Peter Francis, spokesman for the Commission said, "It is a pure coincidence. John Parr's body was placed where it is now by the Germans in 1914.

George Ellison's body was brought to the Saint Symphorien cemetery from a temporary burial place after the war.

It is believed that well over 800,000 British soldiers were killed in World War I and fate has put the first and last of these opposite each other in a cemetery in Belgium.