The Coincidence Which Linked The Nazca Lines 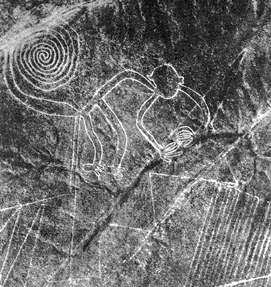 This is a re-post from the early days of 67 Not Out, at a time when the blog didn't have many visitors.

A while back I wrote a post about the author Colin Wilson and his coincidence of where -after reading something - he picked up another book and opened it at an article written about exactly the same subject. Yesterday the same thing happened to me.

With the world of coincidence one thing leads on to another with the aid of synchronicity. And when I was looking for a photo, to include on this post, I searched on Google Images and the first one I clicked on was the one I have used. This turns out to have been released to the Public Domain by - yes, you've guessed - Maria Reiche!