Following my post An Alien Abduction With A Sexual Encounter it's clear from the response that this is far from unique within the annals of UFO and alien stories.

Here are some such encounters from British women and men.

Jane Murphy, from Birstall in West Yorkshire, went to bed one night as usual but woke a few hours later completely naked, within a peculiar room surrounded by tall aliens. She estimated them to be about seven feet tall.

In her words one of the alien figures 'seduced' her. She described her experience:

"I looked into his big, black eyes and knew that it was going to happen. Suddenly he was lying on the table and I was lying on top of him. We were embracing but lying perfectly still.

I remember noticing his smell. It wasn't very pleasant, not a human smell at all ... I couldn't tell if he had any clothes on or not because I simply looked into his eyes. All I can remember is those gigantic black eyes ... It seemed so strange lying on top of this stranger ... and enjoying it."

Afterwards she was examined by some of the other aliens and then - suddenly - she was back in her own bed.

Her obvious reaction was to think that this was all a dream but, as she showered the following morning, she found unusual puncture wounds where the aliens had injected her.

Jane visited her doctor and was given antibiotics to cure an infection which lasted for several months. She wasn't pregnant but was plagued by nightmares where she gave birth to a blond, black eyed alien.

Another case, this time male, was Ted Johnson's experience in the Essex countryside. He was travelling down a lonely lane in his car in September 1985 when he became aware of a light in the distance. He stopped his vehicle, got out and then, in his words:

"I saw the light and heard a low whistling sound. The light became so bright it hurt my eyes. Then I was hit by a green light which knocked me to the ground, partially blinding me." 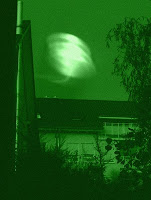 As his sight cleared he saw a woman with "large eyes, a small nose and just a slit for a mouth. She seemed to be glowing." There were also other aliens behind her.

Johnson was led to a UFO or craft where he claims he made love to the woman. He was then returned to his car.

There are dozens of other examples such as Lynda Jones from Manchester. While walking by the Mersey River she saw a disc-like object coming towards her. This suddenly dropped down to near ground level and hovered. She described it as being a grey metallic colour and about sixty feet in diameter.

Understandably she ran towards her home, which was about ten minutes away. The journey, however, took about one-and-a-half hours - even though she felt she never stopped running.

She was later hypnotised and described how she saw figures emerge from the UFO. They took her inside their craft and laid her on a table. All she remembers is, "... them putting something on my legs; it felt like pieces of ice ... bright lights were shone into my eyes."

After a few days strange marks appeared on her body and she went to see her doctor. Lynda said, "My GP said I'd had a miscarriage, but I had not been pregnant." Further examinations found scar tissue on her fallopian tubes.

One of the strangest stories is that of Kathie Davis who was supposedly visited by aliens since childhood. In her teens she became pregnant following a liaison with one of the aliens.

A few months later the aliens returned and removed her foetus.

Several years passed and the aliens returned once more. They briefly showed her with a little girl, which they said was hers - from her impregnation by a ufonaut. She described the girl as looking "like an elf or an angel."

Some ufologists claim that aliens are conducting a deliberate and sustained programme of genetic sampling and possibly even manipulation among the human race. Others will say that's a load of codswallop.

I guess it's all down to what we want to believe.

Further Reading:
Alien Abduction With A Sexual Encounter
A Dream Or An Alien Encounter
John Lennon's UFO Sighting And Abduction