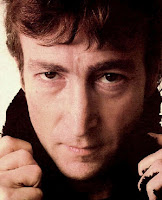 I was reading an article by Shelley Germeaux, a big Beatles fan, and she mentions an interview she did with John Lennon's companion May Pang. In this May describes how the couple both saw a UFO while in New York.

This is how May Pang described the experience to Shelley (you can see the full article here):

So hearing this urgency, I drop the clothes and now I’m nude (laughs) and running out there.

He’s looking up and there’s this thing hanging over our heads! It moves slowly down the East River.

I said, "What the heck? What is it, a blimp?" Even though we knew what it was.

I’m screaming at the top of my lungs and I look around and all the apartment lights around us are black. No one is home. Mind you, it’s Friday night - a hot, summer night, everyone is out. I’m screaming, like a wild woman, and he’s calm. No one hears us or comes out.'

In another interview May describes the UFO's appearance:

'It was shaped like a flattened cone, and on top was a large, brilliant red light, not pulsating as on any of the aircraft we'd see heading for a landing at Newark Airport. When it came a little closer, we could make out a row or circle of white lights that ran around the entire rim of the craft - these were also flashing on and off. There was no noise to be heard.

It actually flew sideways and dipped behind a building, then it came out again! You could have pitched a baseball at it. You could even see the wavy air around it from the heat. It was flying below rooftops!'

After a little research I found that this isn't the only reference to John Lennon and UFOs, though most still come via May Pang. Here's what she told Larry Warren, for example, when he asked her if John had seen any UFOs prior the the one previously mentioned, which happened in 1974:

'Oh no, 74 wasn’t John’s first sighting. In fact he told me that more than once he suspected he had been abducted as a child back in Liverpool . And he felt that experience was responsible for making him feel different from other people for the rest of his life.'

Larry tried to enlarge on what she had said and asked her if she meant that John had been abducted by aliens.

May would only answer, 'Yes, but John didn’t go into detail about it.'

Phsycic Uri Geller told a story of how John Lennon had revealed to him about an encounter with aliens. Take his story as you will

'One night he (John) was lying in his bed in the Dakota building where he lived in New York and suddenly noticed an extremely bright light pouring in from around the edges of the bedroom door. It was so powerful, he thought it was someone aiming a searchlight through his apartment.

He got up, crossed to the door and flung it open. The next thing he could remember were four thin-looking figures. He said that the figures came over to him as he just stood there.

Two of them held his hands and the other two gently pushed his legs and he was gently guided into this tunnel of light. He was shown all of his life, just like watching a movie, and he told me it was the most outstandingly beautiful thing he'd ever seen.

John recalled something being given to him. That was all he remembered, but when he opened his hand there was this odd-looking, not quite egg-shaped, ball of metal - very smooth and very heavy, about an inch or so wide.

I was astounded. I said it sounded like an alien encounter and he seemed to agree and said that he couldn't think of another explanation himself. He was very serious about the incident but also funny about it. Then he put his hand in his pocket, pulled out the object the aliens had given him and gave it to me.

When I touched it I felt a deep sadness - I don't know why - it was like a loneliness. Maybe it was a premonition about his murder, but anyway, that was John's alien story and it happened in the middle of New York.

He gave the object to me and I didn't want to accept it. I have had this since the day he gave it to me. I really cherish it.'

So UFO and alien doubters: If John's seen them they must be true - right?