Sometimes a coincidence or coincidences can bring to the surface emotions locked away for years and years. It's as if the final part of the jigsaw is finally put in it's place. This is such a story, first seen in the Star-Telegraph. 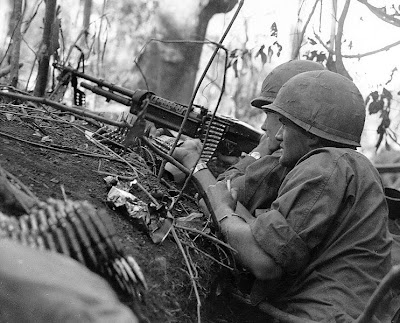 Ada Randall hung a picture of her brother-in-law, Sgt. John E. Miller, in the West Side Cafe, Fort Worth. Sgt. Miller had been killed in South Vietnam nearly 44 years ago.

Galen Taylor was on a break to the area on his way to see his grandchildren. Fancying something to eat he stopped off at the West Side Cafe for some bacon and eggs. As he entered he saw the photo of Sgt. Miller and was instantly reduced to tears.

The cafe's hostess, Angela Rowell, explained, "I saw this big man just burst into tears. I asked him, 'Are you OK, sir?' He just pointed at that picture. Eventually, he managed to get out, 'That's the man whose body I pulled out of Vietnam.'"

Galen Taylor had no idea that John Miller had any connection with Fort Worth. As far as he knew Miller's home town was West Point, Ill. where he was raised with his six brothers and sisters.

Ada Randall, commented, "It was like I had gotten a message from Johnny. It shook me up for several days."

Sgt. Miller had been sent to Vietnam - along with his best friends Wade Linder and Vicente Rodriguez - all of them were members of Alpha Company, 2nd Battalion, 28th Infantry.

On May 12 1966 Vincente Rodriguez was killed and Sgt. Miller had the painful duty of escorting the body from Vietnam back to Pharr in the Rio Grande Valley.

Sgt. Miller had a premonition that he too would be killed. Before he headed back to Vietnam, after the funeral, he sat on the porch of Ada Randall's house in Fort Worth. Randall said, "He didn't think he would come back. I said, 'Oh, don't say things like that.'"

On June 11, 1966, about 9:30 in the morning, Miller was fatally shot in the head just after he single-handedly attacked and silenced a machine gun nest with grenades. He earned the Silver Star posthumously for his bravery. Thirty-four men from 2nd Battalion died that morning in the same firefight. Galen Taylor was wounded.

This time, the third friend, Wade Linder escorted Sgt. Miller's body back to Granbury where he was buried.

Linder insisted on seeing his friend's body in state and pinned the Silver Star on his uniform.

For Galen Taylor, his visit to Fort Worth proved to be deeply satisfying, but stressful too. He had been going to counseling for the last two years for post-traumatic stress caused by feelings and thoughts from Vietnam. These manifested themselves after he retired from working.

"The visit took its toll on me mentally and physically," he said, "But I was very happy to find that picture."

This, however, wasn't to be the end of the story. There was a further coincidence to follow.

After the story became known locally, about Galen Taylor and Sgt. Miller's photo, a Maria Lofton called the Star-Telegram from her home outside Joshua in Johnson County. She told them, "My husband, Staff Sgt. Glen Lofton, was also killed June 11, 1966, and he was in the 28th Infantry. Isn't that a coincidence?"

To say it was a coincidence was an understatement to Taylor. He found it hard to believe that three young men, from different parts of the country, would be in the same infantry unit, the same battle and that all three of their families would eventually make their way to the Fort Worth area.

The three families had all developed Fort Worth ties, unknown to each other for the past 44 years - even though they lived only miles apart.

Galen Taylor was put in contact with Maria Lofton. It was only then that she finally learned the full details of her husband's death. She said, "I never knew how he was killed until I talked to Mr. Taylor"

Everything slotted together because of the photo in the cafe and Galen Taylor fancying some eggs and bacon. But some things are, surely, meant to happen. The final piece of the jigsaw was found and the picture completed.
Posted by Mike Perry at 12:00