The Ancients Secret Transmitters Of Energy 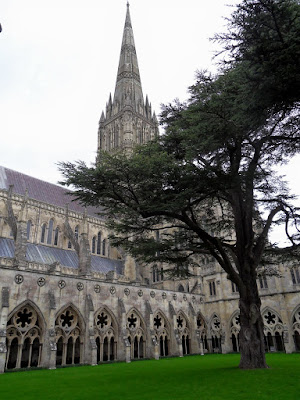 I guess I've had an interest in ley lines tucked away at the back of my mind for many years. While on my recent break, however, these were brought to the forefront when I visited Stonehenge, Old Sarum and Salisbury Cathedral. There's nothing like experiencing things to make them become more real.

These three places I visited are all in a straight line, supposedly on one of the many ley lines that exist throughout England and, of course, the rest of the world.

Old Sarum with spire of Salisbury Cathedral on middle of horizon 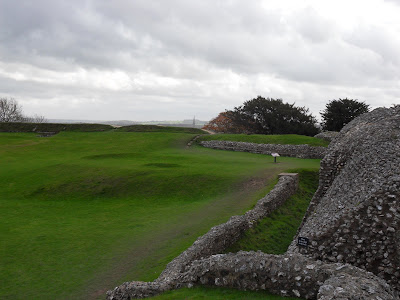 The modern idea of ley lines is usually attributed to Alfred Watkins who, in 1926, realised that standing stones, stone circles, earthworks and prehistoric mounds are found in straight lines.

All Watkins was really doing, however, was re-discovering what ancient and previous cultures had always known.

The Wikipedia definition for ley lines is that they 'are hypothetical alignments of a number of places of geographical interest, such as ancient monuments and megaliths. An archaeologist would probably say that these lines were ceremonial or sacred ways that linked the Great Houses or Ritual Centres. 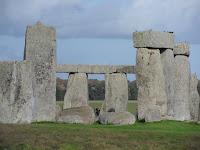 For many though there is more to ley lines than this - they are energy lines. If true this would make Stonehenge extremely powerful as the monument is a crossing point for 14 ley lines. Maybe this is why the various stone circles were built: to be transmitters of energy. They were erected where the earth's energy could be tapped.

This could explain why many stones are said to have healing powers. I mentioned this when writing about the Cornish Men-an-Tol Stones.

Meditation and visualisation are often given a boost when undertaken at such places. Things happen at powerful ley line energy centres.

Peter Thornborrow tells of how walking through the stone circle called 'Long Meg and Her Daughters' in Cumbria he felt dizzy. He described this as if he was 'not really there ... not really in the same time.' He leaned against one of the stones to steady himself and felt what he described as 'an electric shock.'

It's also interesting that UFO sightings are often reported near to ley lines and ancient monuments. There was a case I wrote about: UFOs and King Arthur's Castle at Tintagel.

If we look quickly at ancient cultures, many have their equivalent. The Australian Aborigines talk of paths called turingas and say that at certain times of the year these are energised and revitalise the surrounding countryside.

The Incas had spirit lines known as ceques.

The Germans have Heilige Linien. Teutberger Wald has a large network of these lines which include the megalithic stone circle at Bad Meinberg.

I suppose we should ask why main stream science doesn't take ley lines and possible transmitters of energy seriously. So many cultures and countries have their own versions going back thousands of years. Surely this alone should encourage investigation. 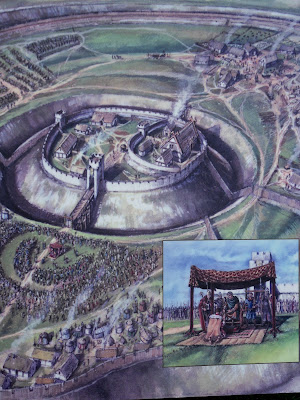 OLD SARUM: Old Sarum stands high above Salisbury Plain and is one of the most important landmarks in the history of Wessex. It is an Iron Age hill fort and Norman fortress. The photo below shows the deep ditch that surrounded the walls. You can just make out the spire of Salisbury Cathedral in the centre of the horizon. The picture above shows how Old Sarum would once have looked. 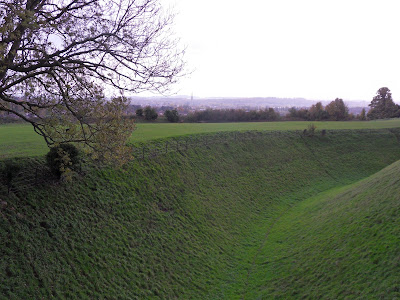