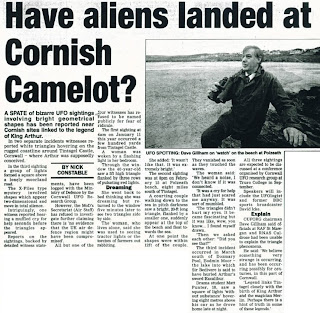 UFOs have been seen in Cornwall, England and interestingly around areas linked to the legends of King Arthur.

Near to the remains of Tintagel Castle on Cornwall's dramatic cliffs white, triangular shapes have been seen hovering near to the castle. One of the witnesses claims to have heard muffled cries for help just before the UFOs appeared.

A woman who lives a few hundred yards away from Tintagel Castle says she was woken by flashing lights coming through her bedroom window. When she looked out she saw a triangular shape flanked by three rows of pulsating red lights. She went back to bed but decided to have a second look minutes later. She then saw two triangles side by side.

There was a further UFO sighting near to Tintagel at Polzeath beach. This time a courting couple - what on earth were they doing in the pitch darkness - spotted a 20 foot long triangle with a second, smaller one nearby. The UFOs appeared at the top of the beach and then 'floated' towards the sea.

The couple claim the triangles came within twelve feet of them and then vanished as they appeared to touch the sea waves.

The woman described the incident: "We heard a noise. I don't know if it was connected. It was a cry for help that had just scared me anyway. The triangles didn't hurt my eyes. It became fascinating but it was like, wow, you know ... I found myself drawn."

Another sighting was south of Dozmary Pool on Bodmin Moor.

If you know the story of King Arthur, Dozmary Pool is the home of the Lady of the Lake and is where Sir Bedivere or Bedwyr is said to have thrown the King's magical sword Excalibur at the end of his life. A mystical hand supposedly caught Excalibur and pulled it beneath the water.

As for Tintagel Castle many say this is where King Arthur was born.

The Dozmary Pool UFO was seen by 18 year old Matt Punter. A square of lights which he described as being 'without substance' hovered about 20 feet above his car as he was driving home at night time.

So could there be any connection between King Arthur and UFOs or is this purely a romantic notion created as perhaps was the legend of Arthur itself?

The legend tells us that when King Arthur was at death's door his wounds were treated by three mysterious maidens. He was placed into a boat and floated down the river. His body was never found. Many believe he rests under a hill, along with all of his knights, ready and waiting to ride forth once more and save the country ...

We could certianly do with a bit of help at the moment.