The Dog Who Waited And Waited For His Owner 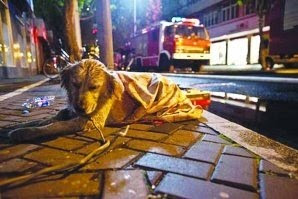 In Jiaozhou Road, Shanghai a dreadful fire broke out on November 15th which killed 53 people. A golden retriever puppy, called Jingjing, must have thought his master was inside so he lay on the ground beside the fire waiting and waiting for his return - he wouldn't move or eat and drink.

Occasionally the puppy would break his vigil to walk back and forwards in a distressed state near to the site of the fire.

When the dog lay still once more firefighters covered him with a blanket and left some food, but he refused to eat. Local residents claim that the dog had tears running down his face. One tried to take him home but the dog growled, determined to remain where he was.

Eventually a firefighter did manage to take the dog to the fire station as the puppy was completely exhausted.

Two days later the dog's owner turned up at the fire station. Jingjing ran towards the owner and the two were reunited. Jingjing hadn't eaten for several days.

Footnote: Though I used the words 'master' and 'owner' in the post this isn't the real relationship between man, woman or family and their dog. It is much more than this, as the story illustrates.

Other Animal Posts:
The Cat Who Just Wouldn't Go Away
The Psychic Power Of Dogs
Goats In Trees Coincidence
Meeting Three Young Birds In One Day