The Night Demon Sitting On Your Chest 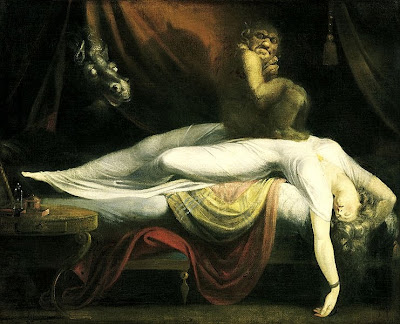 It's only happened to me three times but I remember them because sleep paralysis can be quite frightening. The last time this happened I thought I'd do a bit of research on the subject to see if I could understand why this should happen.

I did the obvious thing and Googled 'sleep paralysis' but somehow I didn't feel that the websites I visited fully answered my questions. They somehow didn't feel right.

I often visit flea markets and car boot sales to buy books, anything that takes my interest. It's possible to pick up books for coppers. Amongst the books I had accumulated was Colin Wilson's Mysteries

. I had read this years ago and thought I'd like a copy for reference.

For some reason I picked up this book, opened it up, and there on page 379 were some words underlined (the only ones in the whole book). As can be seen from the image below this read: "His paralysis sounds like the state that so many have experienced before projection of the astral body. It was the beginning of his remarkable psychic powers."

After having read a lot of the medical info this was the first time something felt right to me about sleep paralysis.

What Wilson was referring to was a story about a psychic called Robert Cracknell. This was something that had happened to him while he was in the RAF (Royal Air Force):

"I remember lying in this bunk, fully dressed and drifting into sleep. And it was as though I woke up. I could hear quite distinctly the voice of the Orderly Officer asking where I was ... And I tried to call out: 'Here I am, sir, just coming.' But not a sound came out. I struggled to get up and found, to my absolute horror, that I was completely paralysed. I knew I was not asleep. This was not a dream. And yet I could not move a muscle, and for what seemed minutes I was calling out for help ... And then, from somewhere at the back of my mind, came the strong impression that I should relax. The panic, however, was too strong. I recall someone walking down the corridor ... this time I managed to struggle out of the peculiar paralysis ..."

My own experience was very similar to the one above. I 'woke' up and felt completely paralysed. Frightened, I called out over and over to my wife to help me but she didn't hear me. I felt, or had an instinct, that I had to try and relax. I was still paralysed for a while but gradually I returned to this world. I know this wasn't a dream.

Wilson writes that this sounds like what happens 'before' astral projection. To me though this feels more like 'returning' from astral projection. As for a medical answer, they would probably say something like: Sleep paralysis is due to an ill-timed disconnection between the brain and the body.

There is lots of folk lore about sleep paralysis, most of which seems to revolve around incubi, demons or other entities sitting on the chest of their victims - thus the picture at the top of this post.

P.S. Since writing this post I have read that Sleep Paralysis is often associated with Out Of Body Experiences (OBE) see, for example, the article A comparison of OBEs with sleep paralysis on Dr. Susan J Blackmore's website.

Further Reading:
Tortured Man Experienced Astral Projection And Travel
How The Virgin Mary Had A Child But Remained A Virgin
Astral Travel By Hypnotherapy