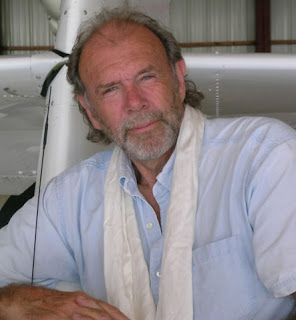 and Illusions: The Adventures of a Reluctant Messiah

He is noted for his love of flying, which he has pursued since the age of 17. He is now 73.

Richard Bach was flying in a rare biplane, a Detroit-Parks P-2A Speedster, of which only eight were ever built. At the time he was barnstorming in the US Midwest. He loaned this to a friend who managed to upend the plane as he came in to land. He said of this, at the time, "They were able to fix everything except for one strut. That repair looked hopeless because of the rarity of the required part."

As he was pondering the problem a man, who owned a hangar nearby, came and asked if he could help. He said they could have any bits and pieces stored in his hangar. Bach explained what it was he wanted. The man walked over to a pile of junk and pointed to the exact part which was required!

Richard said of this, "The odds against our breaking the biplane in a little town that happened to be the home to a man with the forty year old part to repair it; the odds that he would be on the scene when the event happened; the odds we'd push the plane right next to his hangar, within 10 feet of the part we needed - the odds were so high that coincidence was a foolish answer."

I thought I would also include a few interesting quotes from Richard Bach's books:

"Nothing happens by chance, my friend... No such thing as luck. A meaning behind every little thing, and such a meaning behind this. Part for you, part for me, we may not see it all real clear right now, but we will, before long."
Nothing by Chance: A Gypsy Pilot's Adventures in Modern America (1969)

"You have no birthday because you have always lived; you were never born, and never will die. You are not the child of the people you call mother and father, but their fellow-adventurer on a bright journey to understand the things that are."
There's No Such Place As Far Away (1978)

"Don’t believe what your eyes are telling you. All they show is limitation. Look with your understanding."
Jonathan Livingston Seagull (1970)

"A cloud does not know why it moves in just such a direction and at such a speed, it feels an impulsion... this is the place to go now. But the sky knows the reason and the patterns behind all clouds, and you will know, too, when you lift yourself high enough to see beyond horizons."
Illusions : The Adventures of a Reluctant Messiah (1977)

"As long as we believe in sequential time, we see becoming, instead of being. Beyond time, we're all one."
The Bridge Across Forever (1984)