Ezekiel: The Alien Abduction Of The Bible

The prophet Ezekiel being 'lifted up' 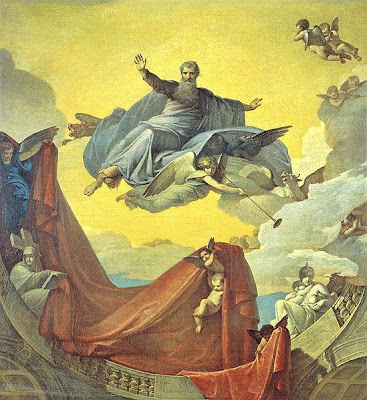 Yesterday, in my post The Ancient UFOs Seen On Earth, I wrote about some of the ancient sightings of UFOs. I was reminded also of the mention of such events in the Bible. The best example being in The Book Of The Prophet Ezekiel. This tells of a strange vehicle coming from the sky near the Chebar River in Chaldea (now part of Iraq) and could also be interpreted as an alien abduction.

v4. And I looked and, behold, a whirlwind came out of the north, a great cloud, and a fire infolding itself, and a brightness was about it, and out of the midst thereof as the colour of amber, out of the midst of the fire.

Reference to a UFO perhaps and then followed a description of the occupants or aliens:

v8. And they had the hands of a man under their wings on their four sides.

v12. And they went every one straight forward; whither the spirit was to go, they went; and they turned not when they went.

The aliens could go wherever they wished and very fast.

v14. And the living creatures ran and returned as the appearance of a flash of lightning.

The wheel, another description of a UFO? And the aliens were lifted up (travelled) in these wheels.

3:v14. The spirit lifted me up, and took me away, and I went in bitterness.

Ezekiel was abducted - and it appears that he didn't want to go with them.

v15. Then I came to them of the captivity at Tel-abib, that dwelt by the river Chebar, and I sat where they sat, and remained there astonished among them seven days.

When released, and returned, he sat 'astonished', which is very much like a classic alien abduction experience.

It's always difficult to interpret old writings, such as the Bible, because of the original language and the various translations that have followed. But if you read Ezekiel in full there are various mentions of wheels being lifted up and of other living creatures.

As Ezekiel dates back to around 592 BC the writer could only describe the happenings by comparing to things he had knowledge of: wheels may well have been UFOs and so on.

So was Ezekiel abducted by aliens or was it all the word of God as many believe?