A-Mail Messages From Beyond The Grave 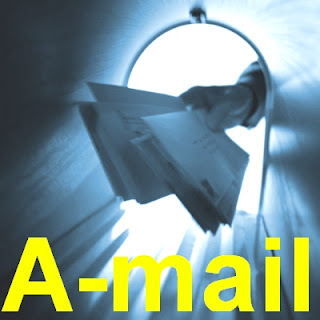 In a way this post follows on from The Bird Angel Who Comforts As Someone Dies - though it isn't about angels or white feathers. It is about, however, messages from beyond the grave.

Brian Scovell was a sports journalist but six years ago his wife Audrey - Aud for short - sadly died of liver cancer. They had been together for 37 happy years and what has been comforting for Brian is that Audrey sends him, what he calls, A-mails.

As he explains, "I was never a particularly religious person before, but after Audrey died, amazing things started to happen. It's as though she has been resurrected in spirit. I believe she sends me messages all the time and they convinced me we will meet again."

The first A-Mail Brian received was following a memorial service for Aud. As he crossed the road a van coming towards him had the letters AUD. In the UK car registration plates usually have three letters plus some numbers.

Since then he has seen many, many AUD plates which arrive at significant times. He says about this, "Whatever anyone thinks, these messages are real to me."

There are also other forms of A-mails, like when Brian's son invited him to New Zealand for a cricket test match series. He arrived on Valentine's Day and in Auckland harbour, which could be seen from where he was staying, was a large liner docked called the Aurora. What shocked him was that the owners of the ship had bought over 50 etchings which Audrey had done before she had died. These were hung in cabins on the ship.

Gavin said to his father, "Mum has come to say hello."

Brian says, There were so many visitations - a plethora of little signs and coincidences that uplifted me."

Another example was when, in his hall, four oriental lilies collapsed "like cranes dipping their arms when a ship is ceremonially launched and everyone is celebrating." This was significant because many of Audrey's etchings were of lilies and on that day he had been wondering if Audrey would have approved of an article he had written. He felt that this was an A-mail saying that she had approved.

Brian has now found a new love in his life and feels that Audrey 'arranged' this from beyond the grave. He sees many parallels between Audrey and his new love Gill. They were born in the same week of the same year, they both have five sisters, Audrey was an artist as were three of the Gill's sisters and so on. He also discovered, when they first met, that Gill lived just 250 yards from Audrey's grave.

Brian has now taken to writing books and was at a signing in Suffolk with Gill. There was a profusion of lilies at the bookshop.

Gill said, as they left, "With those lilies on show, we'll probably run into an AUD now."

They drove to the hotel, where they were staying, and parked in front of the door was an estate car - a light was reflecting the number plate which was, of course, AUD.

Brian says about his present relationship, Gill and I adore each other but, of course, I'll never forget Audrey. He feels sure that Audrey led him to his new love from beyond the grave.

Further Reading:
Her Grandmother Visits Her From Beyond The Grave
The Ghost Of A Nun Was Herself In A Previous Life
The Bird Angel Who Comforts As Someone Dies