The Typewriter Sale Set Up An Amazing Coincidence 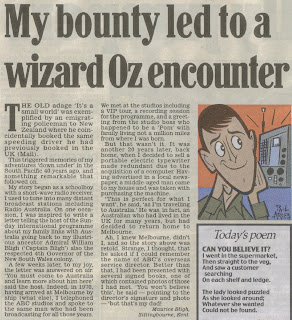 A coincidence story today from the Daily Mail written by Maurice Bligh.


"The old adage 'It's a small world' was exemplified by an emigration policeman to New Zealand where he coincidentally booked the same speeding driver he had previously booked in the UK.

This triggered memories of my adventures 'down under' in the South Pacific 40 years ago, and something remarkable that followed on.

My story began as a schoolboy with a short-wave radio receiver. I used to tune into many distant broadcast stations including Radio Australia. On one occasion, I was inspired to write a letter to the Sunday international programme about my family links with Australia going back to my illustrious ancestor Admiral William Bligh, also the respected 4th Governor of the New South Wales colony.

A few weeks later, to my joy, the letter was answered on air. 'You must come to Australia and learn more about him here,' said the host.

Indeed in 1970, having arrived at Melbourne by ship, I telephoned the ABC studios and spoke to the same man who had been broadcasting for all those years.

We met at the studios including a VIP tour, a recording session for the programme, and a greeting from the studio boss who happened to be a 'Pom' with family living not a million miles from where I was born.

But that wasn't it.

It was another 20 years later, back home, when I decided to sell a portable electric typewriter made redundant due to the acquisition of a computer. Having advertised in a local newspaper, a middle-aged man came to my house and was taken with purchasing the machine.

'This is perfect for what I want,' he said, 'as I'm travelling to Australia.' He was in fact an Australian who had lived in the UK for many years, but had decided to return home to Melbourne.

Ah, I knew Melbourne, didn't I, and so the story above was retold. Strange, I thought, that he asked if I could remember the name of ABC's overseas director. Better than that I had been presented with several signed books, one of which contained photos of those I had met.

'You won't believe this,' he said - pointing to the director's signature and photo - 'but that's my dad!'

Further Reading:
An Unlikely Coincidence Meeting
67 Not Out Readers Coincidence Stories - 11
The Coincidence Of The Identical Shaftesbury Photos