Alex Kingston And Her Ghostly Encounter 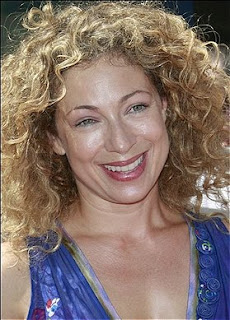 One of the actors appearing in the new supernatural (UK) ITV television series, Marchlands, has her own ghostly tale to tell.

"I remember watching my daughter interacting with someone that I couldn't see at our home in LA ... it frightened the life out of me.

At around the same time, I came home one evening and there was this awful smell in the living room - a bit like rotting flesh. It was totally inexplicable. That night, the smell shifted to our bedroom and the temperature dropped dramatically.

I'm convinced it was the ghostly presence of my grandad. He had been desperate to see Salome (her daughter) and had been bowled over by the ultrasound pictures of her that I'd sent to him in England.

He died before he could meet her, and I reckon this was his way of 'seeing' her from beyond the grave. I believe he visited us in LA."

Marchlands, in which Alex appears, is about three intertwined families who live in the same house at three different times - 1968, 1987 and 2010. They are all linked by the ghost of a little girl who becomes the 'imaginary' friend of one of the child characters in the story. Similar, in a way, to her own experience.

Alex added, "I'm convinced there's something in it. A person generates all this energy during their lifetime; it has to go somewhere after they die. Why shouldn't it manifest itself in spirit form?"

Further Reading:
Where Is Heaven?
The Voices Of Dead People Captured On Tape
Ghostly Rye: The Most Haunted Town In England