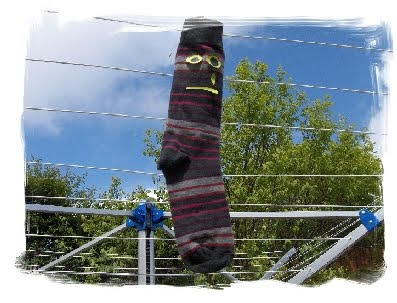 There are many mysteries in life: the solar system, quantum physics, what we actually are and where we came from and so on. I've even written a few post on mysteries such as Knowledge Learned From Fish Like Aliens, Ancient Secret Transmitters Of Energy, Exclusive Photos Of The Stonehenge Mystery but today I want to raise the biggest mystery of them all - and this is how it came to my attention ...

It was a day like any other until I looked out of the window. In the distance I could see just one thing hanging on the washing line at the bottom of the garden - a solitary sock.

I went to investigate and, sure enough, my eyes hadn't deceived me. A single sad looking sock was gently blowing in the breeze, looking quite lost and all forlorn, a tear drop was trickling down one cheek.

I reached to remove the red peg holding the sock to the line but a voice said, "Please don't, I want to stay here until Sidney returns."

It turns out that Sonia, who was the remaining sock, had been deserted by her partner and she wanted to wait until he returned. She felt lost and useless without him.

I discovered that Sonia sock had been alone now for the best part of a day and had been racking her elastic as to why Sidney would have left her. She's been a good partner, their sox life was good and she had kept herself in good shape. She wasn't saggy or baggy. Her figure was trim and her polyester skin sprung back into position after she had been used. She felt lost and useless without him. The whole purpose of her existence was gone.

I left her with her thoughts to see if I could find Sydney.

The mystery fascinated me (and upset me as well, of course) so I set off to try and find out more about these sock creatures, their habits and indeed why Sidney had disappeared.

Shhhhhh! Now be very quiet as, being a modern man, I'm pretty sure I know where a lot of socks live. I want to infiltrate their home to see what's happening. Perhaps there has been some form of sock flu or goodness knows what. 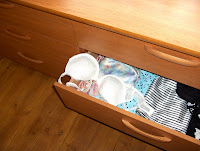 Ah, this looks like the place (photo right). If I open it up gently - whoops! What on earth? No, definitely not socks ... mustn't linger I have a job to do.

I'll creep quietly round to the other side of the room and see if I can get it right this time. Yes, this is definitely the place. I'm sure I've been here before. It's quite magical actually as it keeps getting filled up with more socks without me doing anything - most odd.

I think the socks must mate, must be something to do with their sox life that Sonia was talking about. 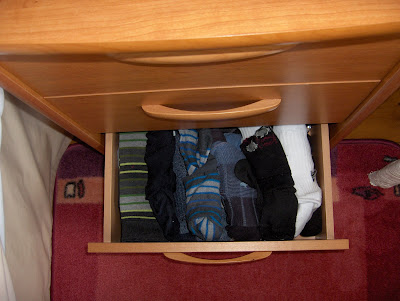 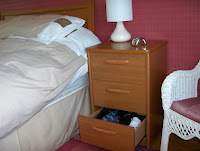 So here we are at the sock den. Now the first thing you notice is that they are virtually all paired off and are intertwined. This is the mating process and goes on for ages. Maybe a week or a fortnight or sometimes even a month or more. Tantric has nothing on them.

I heard of one pair of socks that had been intertwined for the best part of a year and were so old that they had to be removed to wherever it is that good socks go once their usefulness is over. But they died happy. 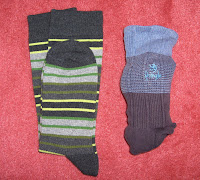 Sometimes, when new socks arrive, they are a bit shy and tend to just lie next to each other but after a while they get the idea and copy the others.

Then there's the special group who all look identical and end up with whoever is the nearest. They frequently swap partners over and over. But they don't normally talk about such things, it's all a bit hush, hush.

This is all very well but there are no single socks in the den and certainly no Sidney. 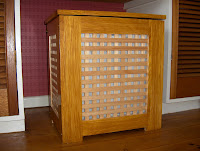 Not getting very far with my enquiries I went to the top and asked the wife, "Where might you find a missing sock?"

"Under the bed, in the washing machine or in the dirty linen basket," she answered without even giving the matter a second thought.

I already knew that, of course. 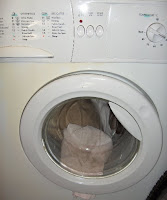 I did a thorough search of the wife's suggestions - well you have to now and again, but to no avail. No Sidney anywhere. I need some more clues so I went to see Sonia Sock again.

"So," I said in my best detective voice, "Had Sidney been seeing someone else - or maybe you have?"

This took her by surprise. "No, no, of course not. I have seen Sidney looking lustfully at a silky stocking with a lacy top but it's all in his head. And as for me, when we have our communal wash, I have admired Wally Walking Sock - so well padded and manly looking but I would never take it further. Oh and Sidney did get entangled with a thong thing once but I'm sure it was all very innocent."

This got me, erm, thinking: silky stockings and thong things - but after half an hour I was back on the job. I continued my enquiries.

The local newspaper was a great help. Sidney missing hit the headlines. As you can gather not a lot happens where I live. And in came reports of several Sidney sightings.

Some of these sightings were a little disturbing and worrying. I must warn you that the following photos may upset sensitive soles or even single socks on the loose. It looks like Sidney may have been on the booze ... 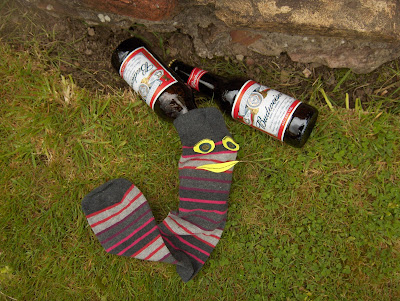 ... and even worse may have been in collision with a car. 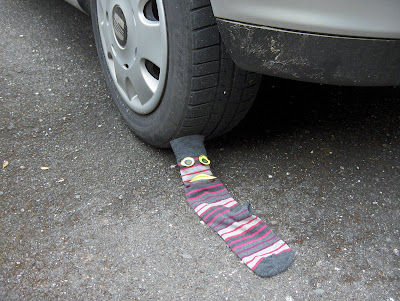 This was probably the lowest point and I kept the newspapers away from Sonia, who was still fluttering on the washing line.

Some of the other photos were much more hopeful. People were searching our house and garden for Sidney with their cameras at the ready - below is a selection of these photos. 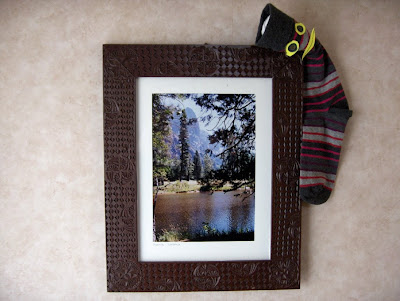 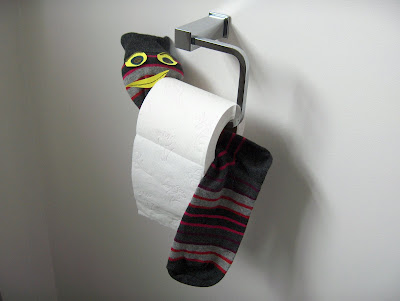 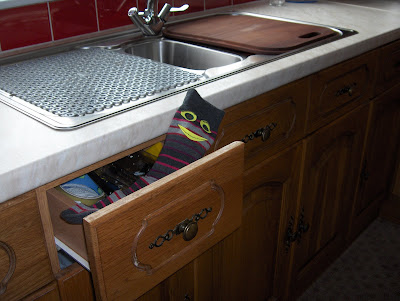 I went to the bottom of the garden and showed Sonia the best photos. It cheered her up in a tearful sort of way and she continued to blow in the wind.

I didn't really know what else to say so I said I'd keep in touch and that the case definitely wasn't closed.

As I walked away I heard her singing softly into the breeze ...

Well, darlin', now that you're gone
I don't know what I'll do
All the time and all my love for you-ou-ou .."
It brought a lump to my throat, I must stop eating so many sherbert lemons.

But not all is lost. There have been sightings of Sidney and he seems to be on his travels judging by the photos. 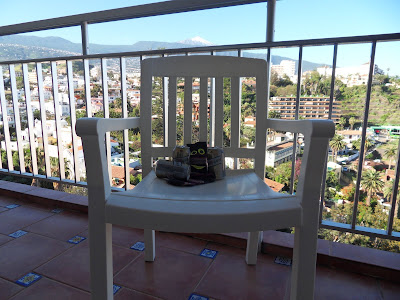 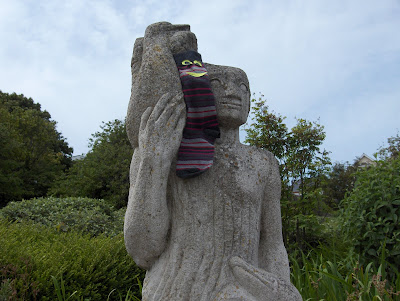 Then there was this postcard (viewcard) which arrived from Sidney Sock to Sonia! It's from northern Germany and the pic is of the restaurant and cafe Zur Fahre in Bonsberg, Gelting. I didn't do too good a job of scanning the postcard but I think you can see it okay.

It's a puzzle! Whatever next? The mystery deepens. 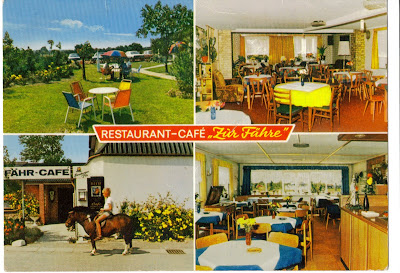 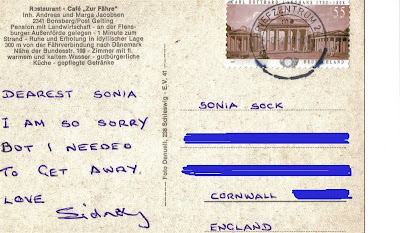 I see the cafe/restaurant/hotel above has a website Fahr Cafe & Hotel - Bonsberg. Will see if I can find anything out from them about Sidney Sock, now where is my German phrase book!

I contacted Germany following the postcard above but they didn't seem to understand me. Their reply sounded something like, "Sidney Sock, Was is das?"

It's amazing, to think we have small children, knee high to a grasshopper, speaking English in England and yet in Germany ... oh well.

Perhaps you have some ideas as to what happened to Sidney Sock, you might even have come across this mystery yourself. Maybe it was an alien abduction, a worm-hole or even a black hole in the washing machine. Perhaps he slipped into a parallel existence where all of the other missing socks hang out. I don't know the answer myself.