The Creation Of Real Live Fairies And Goblins 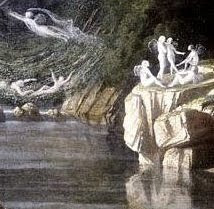 See what you think of this ...

I know of someone who has seen fairies and goblins - real ones, that is. They were at the bottom of his very large garden.

But isn't it true that man cannot imagine that which does not exist? No one can make a picture of the non existent. In which case fairies, goblins, brownies, undines and so on must be visible to the human eye. Or at least to those sensitive enough to see such things.

Yes, fairies and so on do exist in elemental forms and it's us humans who create them with our thoughts. As mankind develops we begin to think more forcefully. These thoughts become little centres of consciousness within the Divine Mind - or whatever you prefer to call this.

The centres eventually assume different forms, according to the quality and the subject of the thoughts which created them.

Elementals grows in a similar way to a mother's embryo and draw strength and vitality from the thinker. Since, whatever is created on the mental plane must embody itself in a physical form at some time, these elementals must take on some kind of physical bodies.

Some of these centres become fairies, goblins and the like while others become embodied in animal or insect form. There are good and bad elementals dependent on the nature of their consciousness - which, remember, was created by the thoughts of man.

If the centres are made of destructive thoughts they would become an animal or insect that will annoy man and perhaps be destructive to his property. This is all in line with the law that whatsoever man send forth mentally must and will return to him.

The Bible says in Genesis 1:31 - 'And God saw every thing that he had made, and behold, it was very good.' So it's us who have created the not so good on earth by our thoughts.

Some say that man's licentious and obscene thoughts have created the creepy, crawling, stinging and biting bugs and insects that inhabit dirty and unclean places. As these are created by man's lower mind they are unable to use atoms of a high vibration for their bodies, so they choose 'diseased' or low vibration atoms, which can no longer be used by man or animals.

Yes, fairies and goblins and those nasty insects are with us and we created them all. This is a power within us because, "God created man in his own image, in the image of God created he him; male and female created he them" Genesis 1:27. In which case, like God, we can create.

Wonder what we'll create today? Cockroaches or something wonderful?

Further Reading:
The Magic Of Our Ancestors Can Bring Us Success
Visualisation Of The Mystic Masters
Professor proves Psychic Powers Exist